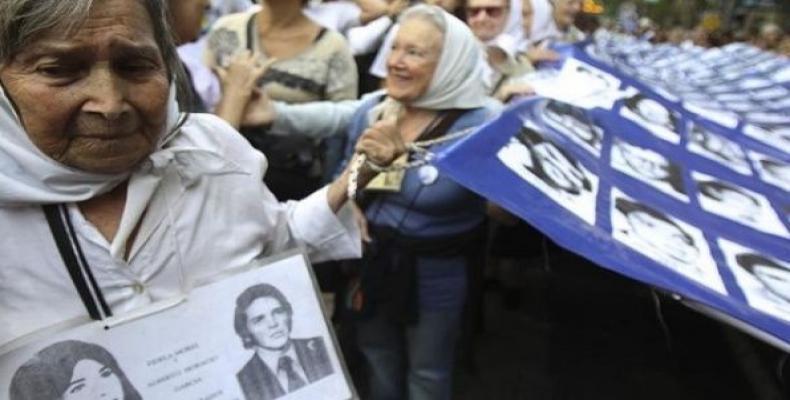 Buenos Aires, May 10 (RHC)-- A U.N. expert and an Argentinean court said axing sentences in crimes against humanity cases is unconstitutional and against international standards.  A controversial and precedent-setting Supreme Court decision in Argentina has attracted a wave of criticism after judges handed down a ruling to apply a law known as "two for one" to reduce the sentence of prisoners convicted for dictatorship-era crimes against humanity during the country's last military regime, raising concerns that more human rights abusers could benefit from the measure.

Amid widespread outcries from human rights organizations, a federal court in the province of San Juan also rejected the Supreme Court's ruling, declaring it unconstitutional for giving unfair and privileged treatment to those convicted of state terrorism.

The judges said it didn't address the problem of constitutionality and could only be used for the case of Luis Muiña, who was sentenced in 2011 to 13 years for torture and illegal detention and was the first to benefit from "two for one" last week.

Meanwhile, a regional representative of the United Nations, the Regional Office for South America of the U.N. High Commissioner for Human Rights, urged Argentina's top court to respect international standards with its treatment of grave human rights crimes.

"The Argentinean state and the Supreme Court as an instance of the state must comply not only with the domestic law but also with applicable international regulations and the commitments assumed at the international level," said Amerigo Incalcaterra, head of the South American OHCHR office.

Last week, Argentina's Supreme Court applied Law 24.390 — valid from 1994 until 2001 when it was overturned — to the case of Luis Muiña. Known as "two for one," the controversial law allows defendants who served a pre-trial detention of more than two years to see each day spent in jail after the two-year mark counted as double, reducing their overall sentences.

The defunct law had never before been applied in the case of crime against humanity, and the move to set a precedent that could benefit as many as hundreds of other dictatorship-era human rights abusers has sparked widespread alarm.

"Crimes against humanity aggravate not only the victims but all human beings.  Therefore, they can not be assimilated as common crimes and their seriousness requires a proportional sanction," said Incalcaterra.  The officer included in his statement that the country must respect that rights in the face of war crimes and crimes against humanity are "imprescriptible," meaning they can't be taken away by prescription or by a lapse of time.

He said the Convention on the Non-Applicability of Statutory Limitations to War Crimes and Crimes against Humanity, which was ratified by Argentina in 1995 and the Rome Statute of the International Criminal Court, even go further to establish a legal framework for prosecution of criminals and reparations for victims.  "The right to reparation for victims of these crimes is a basic human right enshrined in universal and regional human rights treaties, as well as in other international instruments, and should, therefore, be protected," said Incalcaterra.

Finally, Incalcaterra stated that the Supreme Court should consider the Vienna Convention on the Law of Treaties in order to refrain from using a domestic law to justify the violation of an international obligation.

Meanwhile, the human rights organization the Mothers of Plaza de Mayo called for a protest Wednesday to reject the court decision. The Mothers announced they will wear their signature white handkerchiefs to the march and demand justice for the 30,000 victims who disappeared and were murdered during the dictatorship and invited other supporters of the cause to also march with the iconic symbol of the movement.

"During the event, we will announce from the stage the precise moment in which everyone will wear the handkerchiefs on their head as a sign of rejection to the 'two for one,' representing the 30,000 and a whole society that remembers," the Mothers said in a statement.