Brazilian President Refuses to Resign Amid Scandals and Mass Protests 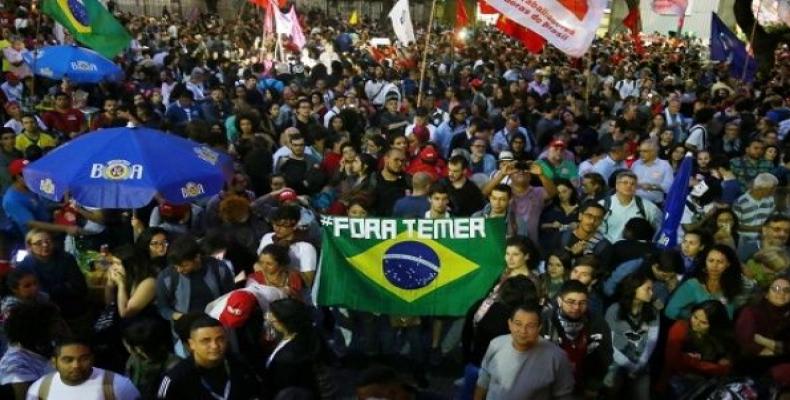 Brasilia, May 23 (RHC)-- Brazilian President Michel Temer said he will not step down even if he is formally indicted by the Supreme Court amid a corruption scandal and large demonstrations calling for his resignation.

"I will not resign.  Oust me if you want, but if I stepped down, I would be admitting guilt," said Temer in an interview with Brazil's Folha de S. Paulo newspaper.

The comments came after a recording disclosed last week caught Temer on tape giving his blessing to bribes to keep a key witness quiet -- jailed former lawmaker Eduardo Cunha -- as he was targeted in the country's largest corruption investigation.  Temer said the recording was not proof of wrongdoing and that he did not report the references to bribery to authorities because he did not believe them.

Since the release of the wiretap, the most damning scandal to rock Temer's corruption-plagued government since it was installed last year, protests have taken place in São Paulo, Rio de Janeiro and other cities, with tens of thousands of demonstrators marching to demand the president resign, chanting and waving banners reading "Temer Out!"

The Supreme Court is expected to decide on Wednesday whether to suspend the investigation at Temer's request until it can be determined if the recording was manipulated to implicate him.

The Brazilian Bar Association said it would file an impeachment motion against Temer in Congress, and even Globo, the country's largest media conglomerate, urged Temer to resign in a newspaper editorial last week.  Temer told the newspaper he is "absolutely" sure that he is capable of finishing his term through 2018 and will not refuse to push forward two controversial reforms on labor and social security.

Temer took office after the parliamentary coup against Dilma Rousseff, promoted by Cunha, and has faced a strong rejection from social organizations who demand elections.