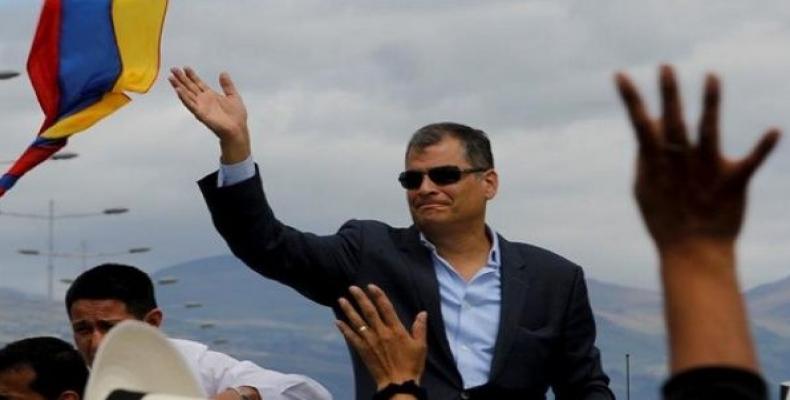 Quito, July 12 (RHC)-- The former president of Ecuador, Rafael Correa, having just handed his presidency over to Lenin Moreno, was followed by a procession of citizens as he departed to Belgium, where he will live with his family for the next few years.

Correa is moving to Belgium to join his Belgian wife Anne Malherbe.  In comments from Quito's airport, he said: "The day has arrived, dear Homeland.  I must leave.  We left a country transformed but still in process."

A large crowd gathered to say goodbye as he took off from the Mariscal Sucre airport located in Tababela, west of the capital Quito.

Former Ecuadorean president Rafael Correa said: “I have mixed feelings: sad to leave my country which I love; sad to leave you but also happy to finally spend time with my family, to bring them peace.  I’ve been personally happy these 10 years but they have undoubtedly been difficult for my family.”

He called on citizens of the country to defend the gains of the Citizen’s Revolution, the program of progressive social and economic transformation launched under the banner of 21st Century Socialism when his government took office in 2007.  “Defend what we have achieved, defend this revolution,” he emphasized.

Rafael Correa is considered to be one of Ecuador’s most popular presidents.  In 2014, his approval rating peaked at 83 percent, and he left office with a 62 percent approval rating.

As president he launched the Citizens’ Revolution which has empowered workers, Afro-Ecuadoreans, Indigenous groups and the LGBTI community.  His administration has not only doubled the country’s minimum wage, it has also lifted over one million people out of poverty, doubled spending on health care and education, established sources of clean energy and slashed unemployment to 4.3 percent as of last year.