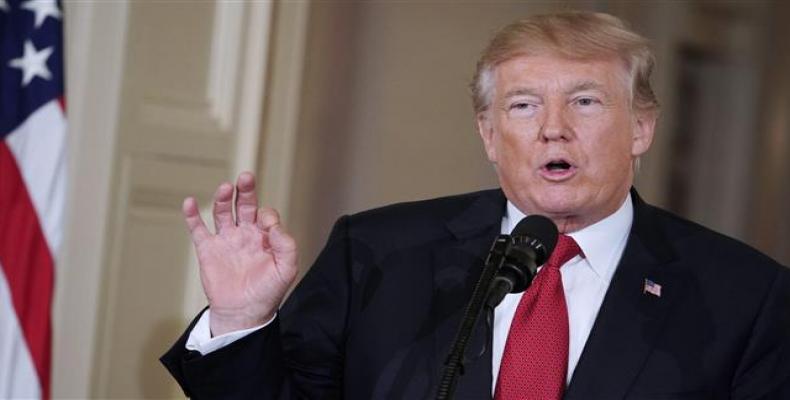 Washington, October 13 (RHC)-- U.S. President Donald Trump has announced that his government will decertify the Joint Comprehensive Plan of Action, JCPOA, with Iran.

During a news conference at the White House on Friday, Trump said: "Since the signing of the nuclear agreement, the regime’s dangerous actions has only escalated.  We cannot and will not make this certification."

Trump also announced that he will impose sanctions on Iran's Islamic Revolutionary Guard Corps, which he accused of supporting "terrorism" across the world, including the Middle East.

In anticipation of Trump's announcement, Iran vowed to retaliate against the measure.  “Any move against the Armed Forces of the Islamic Republic of Iran, including the Islamic Revolution Guards Corps, will be met with Iran’s fitting and strong response,” Iran's Foreign Ministry said in a statement.

The 2015 agreement was drawn up between the administration of former U.S. President Barack Obama and top officials from the United Kingdom, France, Germany, Russia, China, the European Union and Iran.

It laid out that the international community would lift longtime, strangling economic sanctions on the Iranian government and citizens, in exchange for the country’s gradually-decreased production of enriched uranium and weapons-grade plutonium. The International Atomic Energy Agency, IAEA, would oversee Iran’s compliance to the agreement.

All other signers to the agreement have pushed for the agreement's continuation and affirmed Iran's compliance.

Since his candidacy, Trump originally said he would take United States out of the JCPOA.  His administration maintains a critical rhetoric toward the deal and Iran.

The White House also claimed that Iranian leaders are saying they will prevent IAEA inspections.  Trump's administration has yet to bring such evidence forward, and the IAEA itself has maintained that Iran is in full compliance with the deal.