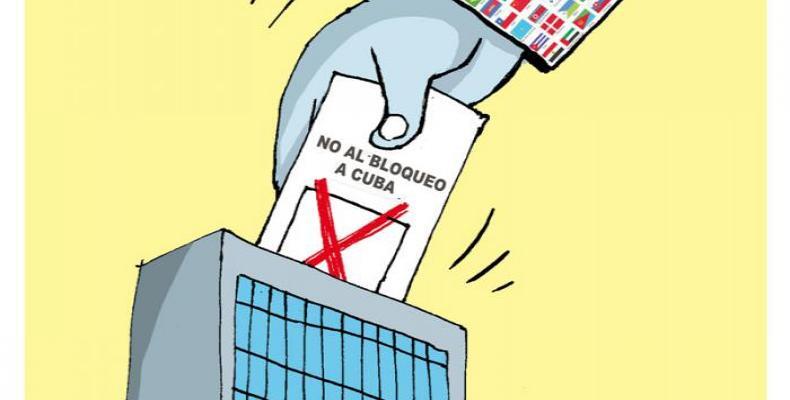 New York, November 1 (RHC)-- The vast majority of the international community represented at the United Nations General Assembly once again raised their voices in support of the UN resolution that calls for an end to Washington's nearly six-decade old blockade policy against Cuba.

Before the Cuban-sponsored resolution was finally put to the vote, representatives of UN member states, regional groupings and international organizations took the floor to condemn Washington's coercive policy.

The representative of the Plurinational State of Bolivia blasted the speech by the U.S. representative, which he said is further evidence of U.S. interventionist approach towards Cuba.

“The U.S. blockade constitutes further evidence of the unilateralism that prevails in U.S. policy toward Cuba and the rest of the world. They don't listen to the claims of the vast majority of the international community. They simply resort to all ways and means to advance their own hegemonic interests.”

About the UN resolution against the U.S. blockade, Bolivian President Evo Morales wrote on twitter: “With blockades, walls, environmental pollution, interference in the internal affairs of other nations, military invasions and unilateral sanctions, the United States poses the deadliest, most serious threat to Mother Earth and the human survival on our planet. The criminal U.S. blockade has not prevented Cuba from being an example of solidarity amongst peoples of the world.”

The representative of Egypt also took the floor to express his country's permanent support for and solidarity with the people of Cuba against the U.S. blockade. He stressed that Washington's unilateral blockade policy has caused Cuba severe economic and human damage, and has hinder the Caribbean country's access to technologies and resources, which are essential to the country's fulfillment of the Sustainable Development Goals contained in Agenda 2030 of the United Nations.

Meanwhile, the distinguished representative of Algeria said that while the UN General Assembly applauded the reestablishment of diplomatic relations between the United States and Cuba, and hailed the progress achieved toward normalized bilateral relations over the past few years, the current U.S. administration is now intent on reversing most of what has been accomplished in that regard. “Algeria, he said, condemns and opposes all unilateral measure, which damage other nations and peoples.”

The representative of Russia, for his part, reaffirmed his country's support for Cuba against the U.S. blockade. He blasted the speech by the U.S. representative as hostile and said that the blockade policy constitutes a discriminatory practice, which turns sanctions into a foreign policy tool.

“Based on the UN Charter, we can only oppose this policy,” the Russian representative said.

The representative from Colombia said: “The blockade contravenes international law and the UN Charter.”

She further charged that as a matter of principle, Colombia respects the inalienable right of every nation and people to freely decide on their own destiny without any foreign interference in their internal affairs.

The representative of South Africa expressed his country's profound disappointment with the decision of the current U.S. administration to roll back the rapprochement begun in 2014 between the United States and Cuba.

The Chinese representative at the UN General Assembly said the U.S. blockade constitutes the main obstacle to Cuba's efforts toward fulfilling the Sustainable Development Goals.

“The U.S. blockade runs against UN resolutions and hinders the right of the Cuban people to develop. This is why, China expresses its full support for the Cuban cause against the U.S. blockade.”

The Mexican representative at the UN General Assembly reiterated his country's strong rejection of Washington's unilateral sanctions against Cuba, which he said violates the principle of respect that must prevail in relations between states.

He commended Cuba's efforts toward prioritizing social development in its domestic policy.

Venezuelan Foreign Minister Jorge Arreaza resorted to social networks. He wrote: “The New York Declaration of 2017 (NON-Aligned Movement) condemns blockades and unilateral sanctions, which are deemed illegal by International law. Multi-lateralism must prevail over these inhumane policies. The countries which impose these kind of sanctions on other states should pay compensation to the affected nations and peoples.”

Meanwhile, the representative of the Organization for Islamic Cooperation also took the floor. He lamented that despite the reestablishment of diplomatic relations between the United States and Cuba, the blockade policy remains unabated.

Right after the vote, the representative of Estonia spoke on behalf of the European Union to explain the vote of all EU members in favor of the UN resolution against the U.S. blockade. She said that the blockade policy hinders Cuba's development, as it limits its trade and investment relations with third countries and parties, as well as the country's efforts toward fulfilling Agenda 2030 of the United Nations.