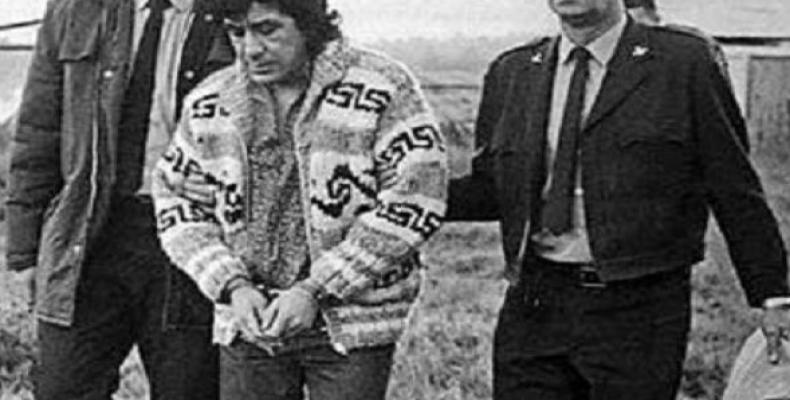 Miami, Feb 12 (RHC)-- In the U.S., Native American political prisoner Leonard Peltier, of the Turtle Mountain Band of Chippewa Indians, is now in his 43rd year of imprisonment.  Peltier is currently being held in a Coleman, Florida federal prison and has been in custody since 1976 for his alleged involvement in a shootout where two FBI agents and one Native American lost their lives.

For over 40 years Peltier has declared his innocence.  The FBI has had to retract several statements regarding the supposed shootout including that its agents were fired at in “cold-blooded ambush” by AIM members.

An online petition is currently circulating for Peltier’s release reading that Peltier was arrested in Canada and falsely extradited to the U.S. in 1976 expecting a fair trial, which he never received.

Peltier, whose health is failing, released a statement today from the Coleman penitentiary saying, “I have had such high hopes over the years that I might be getting out and returning to my family in North Dakota. And yet here I am in 2018 still struggling for my FREEDOM at 73.”  He went on to say, “I have pleaded my innocence for so long now, in so many courts of law, in so many public statements issued through the International Leonard Peltier Defense Committee, that I will not argue it here. But I will say again I DID NOT KILL THOSE AGENTS!”

Former U.S. attorney during the Jimmy Carter administration, James Reynolds last year asked then President Barack Obama to release Peltier on clemency as it was “in the best interest of justice.”