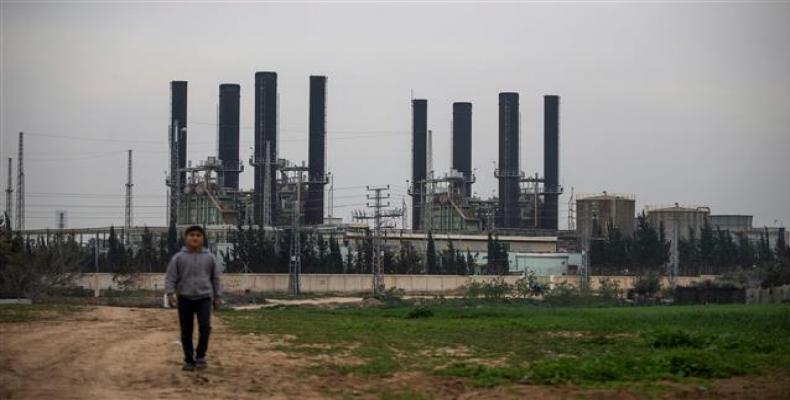 Gaza City, Feb 16 (RHC)-- The sole electricity plant in the Gaza Strip has stopped working because of a lack of fuel as concerns grow over worsening humanitarian conditions in the besieged Palestinian enclave.  Mohammed Thabet, spokesman for Gaza's energy distribution company, said on Thursday that it was informed by the energy authority that the power station had stopped functioning at midnight because of the lack of fuel.

"The Gaza Strip needs around 500 megawatts (per day). We have an energy deficit of 380 megawatts," media outlets quoted Thabet as saying.  Meanwhile, the distribution company has called for rapid moves to provide fuel to the plant again, which normally provides around a fifth of Gaza's electricity.

The power station has temporarily shut down a number of times in recent years over energy shortages.  It was hit by Israel in previous wars with the Palestinian Islamic resistance movement, Hamas.   Since mid-last year, the Israeli regime also began reducing electricity supplies to the Gaza Strip, worsening an already severe shortage in the enclave.

In a separate development, the UN's Middle East envoy, Nickolay Mladenov, briefed the UN Security Council on the “catastrophic” humanitarian crisis in the blockaded Gaza Strip, blaming the Israeli regime for the deteriorating situation.

Bolivian Ambassador Sacha Llorenty Soliz said Mladenov told the council behind closed doors this week that drinking water was short, hospitals had been closed and “doctors stopped doing surgeries” in the coastal enclave.

The Gaza Strip has been under an Israeli siege since June 2007.  The blockade has caused a decline in living standards as well as unprecedented unemployment and poverty there.  Israel has also launched several wars on the Palestinian territory, the last of which began in early July 2014.  The last Israeli military aggression, which ended on August 26, 2014, killed nearly 2,200 Palestinians.  Over 11,100 others were also wounded in the war.