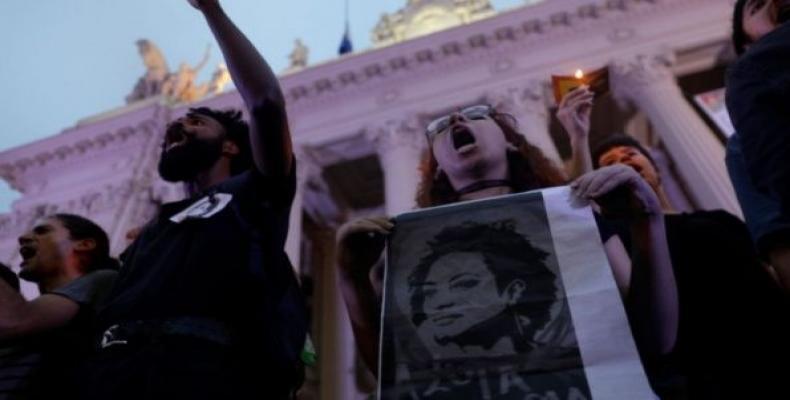 Río de Janeiro, March 19 (RHC)-- About 2,000 people marched through the Mare favela in Rio de Janeiro on Sunday in memory of human rights activist Marielle Franco, who was gunned down and assassinated according to the first elements of the investigation.

"Marielle's voice will not be silenced," a march leader shouted through a megaphone.

As a black woman from the Mare herself, Franco, 38, stunned many when she was elected to a city council seat in 2016. She won fame as a rights activist, particularly for pointing out police brutality targeting the impoverished favela districts.

Many at Sunday's march considered her killing — four gunshots to the head in a seemingly well-planned hit — an attempt to silence criticism of the security forces. Her driver was also killed.

Marcelo Freixo, a Rio state legislator from the small, leftist The Socialism and Freedom Party (PSOL), to which Franco also belonged, called her killing "revenge and a message." "They wanted to make people afraid, but what will happen is the opposite," said PSOL congressman Glauber Braga at the march. "Courage will spread through Brazil."

Tensions are high in Rio as the war on drugs has been used as a justification for the ramping militarization of security, resulting in many civilian victims, including an incident Friday in which stray bullets killed a toddler and two other bystanders.

A month ago, President Michel Temer ordered the army to take charge of Rio's security, but there has been little evidence that the situation is coming under greater control, while the death toll keeps accumulating.