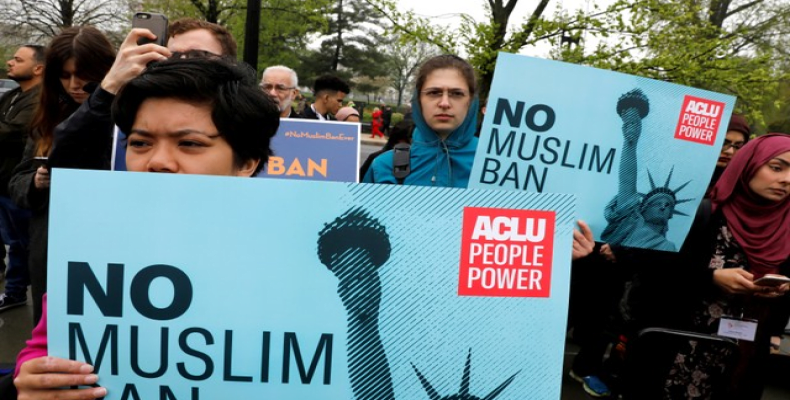 The American Civil Liberties Union (ACLU) and a number of other partner organizations challenged the top court's ruling on Tuesday, denouncing the decision as a historic mistake.

The ruling "will go down in history as one of the Supreme Court's great failures," Omar Jadwat, an attorney with the ACLU, said in a statement.

"The court failed today, and so the public is needed more than ever.  We must make it crystal clear to our elected representatives: If you are not taking actions to rescind and dismantle Trump's Muslim ban, you are not upholding this country's most basic principles of freedom and equality," he added.

Nihad Awad, the chief executive officer and founder of the Council on American-Islamic Relations, slammed the decision as extremely disappointing and said it has "taken us back to the dark ages of our society."  Awad said: "The Supreme Court decision today has given the Trump administration a free hand to re-inject discrimination against a particular faith back into our immigration system, which was rejected more than 50 years ago."

"The Supreme Court's decision ignored the fact that this president and candidate has targeted a particular faith community which is Muslims here and abroad," he added.  Awad called the Trump administration a "white supremacist administration" that injects fear into "faith groups and people of color."

Muslim Advocates, an organization that has filed eight lawsuits related to the entrance policy, said they were totally hopeless but blasted the court battle as just "one fight in a broader battle against Trump's anti-Muslim and anti-immigrant agenda."

The travel ban, the group said, has separated and denied people opportunities to work, travel, study, seek better medical care and will have a ripple effect into other communities.

"This decision puts the basic rights of all Americans at risk. It says that even when an administration is clearly anti-Muslim, when it targets Muslims, when it insults Muslims, and when it puts a policy in place that specifically hurts Muslims - that the Court will let it stand," the group said in a statement. "If it can happen to Muslims, it can happen to anyone."

Meanwhile, U.S. Senate Minority Leader Chuck Schumer said the ruling was wrong and would not make the U.S. any safer.  "The president's travel ban doesn't make us safer, and the Supreme Court's ruling doesn't make it right," he said.  "This is a backward and un-American policy that fails to improve our national security."

Justice Sonia Sotomayor, who voted against the ruling, said the decision was motivated by "anti-Muslim animus," adding that the verdict fails to address the pain and suffering of countless families and individuals living in the United States.  "The Proclamation was driven primarily by anti-Muslim animus, rather than by the Government's asserted national-security justifications," she noted.

Earlier in the day, the Supreme Court ruled 5-4 in favor of the U.S. president and rejected claims that the travel ban represented unconstitutional religious discrimination, saying it fell "squarely within" the presidential powers.

The ruling means the Trump administration can fully enforce its entrance restrictions on most citizens of Iran, Libya, Syria, Yemen, Somalia, Chad and North Korea, along with some groups of people from Venezuela.

The case has been central to the Trump administration's immigration policy, presenting a key test of the president's campaign promise to restrict immigration and "secure" America's borders.

During the 2016 presidential race, Trump campaigned for "a total and complete shutdown" of Muslims entering the United States on the pretext of preventing terrorist attacks.

The U.S. president claims the restrictions are needed to tighten security and prevent terrorist attacks.  Opponents say the ban violates the U.S. Constitution because it discriminates against Muslims and certain nationalities.