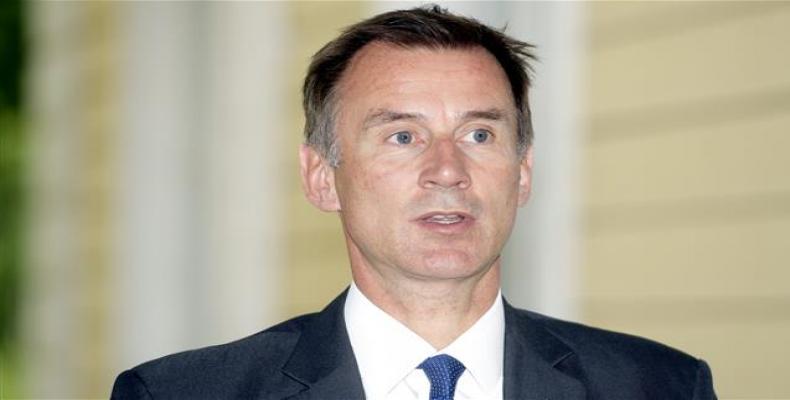 London, August 22 (RHC)-- Britain's top diplomat has sought to defend U.S. President Donald Trump against the criticisms surrounding him as London struggles to cement an alliance with Washington at a time of increased uncertainty about Brexit.

In an interview recorded before his Tuesday trip to Washington, Foreign Secretary Jeremy Hunt said Trump was not the feared figure many thought he would be as a result of his unilateral decisions.  “It’s important... whatever the controversies around Donald Trump, to recognize that actually he has not been the isolationist president that many feared he would,” Hunt told the BBC radio, adding that the United States remained Britain’s closest ally.

The remarks come amid increasing uncertainty about the future of relations between Britain and the European Union.  Hunt and other senior figures in the British government have been doubtful whether they could reach a deal with the EU on how Britain will leave the bloc in March next year.  Some have even warned that a no-deal Brexit would spark a civil unrest in the country.

Hunt’s remarks about Trump come despite EU’s repeated criticism of the U.S. president for protectionist policies. The Europeans are angry at Trump’s imposition of tariffs on certain imports from EU countries while they have also criticized Trump for his unilateral decisions to withdraw the U.S. from major international agreements, including a 2015 Paris climate pact and the nuclear deal with Iran.