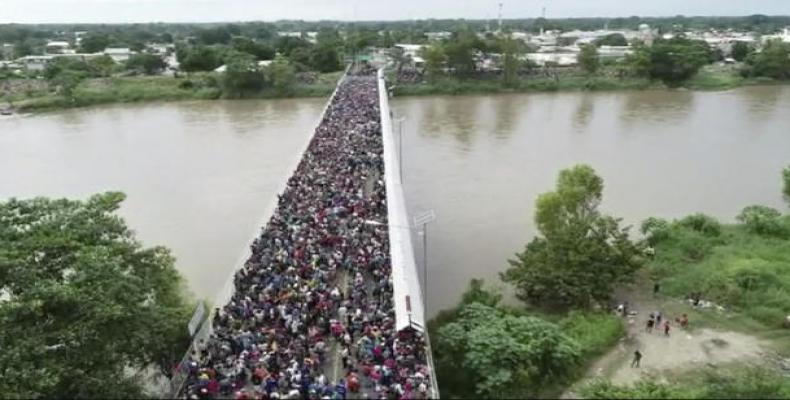 Mexico City, October 26 (RHC)-- The caravan of housands of migrants from Honduras and other Central American nations continues heading north, while another group is expected to leave out of El Salvador on October 31st.

Sources have told teleSUR that two caravanistas have died in the more than 3,500 km journey north.
While U.S. president Donald Trump tweeted that he’s sending in an undisclosed number of “military troups” to the southern border to address what he calls a “national emergency,” on top of the already 2,100 National Guard placed there earlier this week, at least 50 U.S. legislators are calling for Trump to request that the Honduran government investigate the slew of unconvicted human rights violations in the country, mainly murders and intimidation of journalists along with other human rights activists over the past few years.

In a letter released by the Democratic offices of Massachusetts Senator Edward J. Markey and Illinois Representative Jan Schakowsky, the legislators say they are “highlighting the growing threats against human rights defenders, journalists, and international human rights observers in Honduras, (and have) grave concerns around Honduras’s human rights record” toward civil society members in general.

In the letter signed by over 45 other Senate and House members, the lawmakers point to the threats made against members of Witness for Peace and Honduras and the “public intimidation campaign” against the family of the military-slain activist Berta Caceres as reasons for the investigation. The elected officials call on a full report to Congress regarding the findings.

Earlier this week, Venezuelan President Nicolas Maduro mocked U.S. Vice President Mike Pence’s statements from the day before claiming that Honduran President Juan Orlando Hernandez told him the caravan was "organized by leftist groups and funded by Venezuela.”
"If it were not for an extremist, a crazy extremist, like Mike Pence... one would only laugh at that.  The first thing that (statement) provokes is laughter and the second is a concern because the imperialist paranoia begins to accuse President Maduro and Venezuela of everything that happens to them," he stated.

Alex Mensing, coordinator of the Pueblo Sin Fronteras association that accompanies the caravan, also dismissed Pence's version by asserting that Honduras has had "a humanitarian crisis that has been going on for many years."

Honduran head of state Juan Orlando Hernandez is himself guilty of thwarting the rule of law by directing the U.S.-backed military coup of President Manuel Zelaya in 2009.  Extortion and death threats have become a regular part of life in Honduras since the coup and state violence against citizens has only intensified since last November’s elections put President Hernandez (JOH) back in the presidential palace after election results were widely accepted as fraudulent.