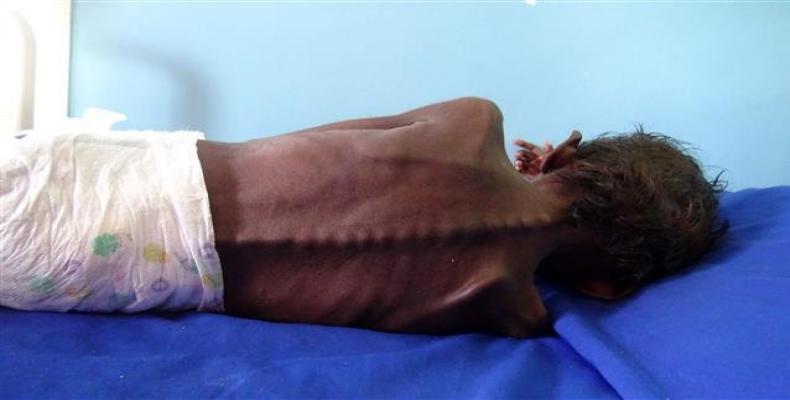 Geneva, December 7 (RHC)-- The UN food agency says more than 15 million people in Yemen are in food “crisis” or “emergency,” warning that the number could increase to 20 million without sustained food aid, as the brutal war imposed by Saudi Arabia on the impoverished nation nears its fourth anniversary.

The World Food Program (WFP), the world's largest humanitarian organization addressing hunger and promoting food security, announced the disturbing news in a statement, saying it was based on a survey, jointly conducted by Yemeni and international experts in October according to an international system for classifying food crises.

The organization also found that some 65,000 Yemenis were in a food “catastrophe” or near famine levels, mostly in conflict zones in the Arab Peninsula country, adding that the number could rise to 237,000 if desperately-needed aid did not get through.

Leading a coalition of its allies, including the United Arab Emirates and Sudan, Saudi Arabia invaded Yemen in March 2015 in an attempt to reinstall former president Abd Rabbuh Mansur Hadi, who had resigned amid popular discontent and fled to Riyadh.

The imposed war initially consisted of an airstrike campaign but was later coupled with a naval blockade and the deployment of ground mercenaries to Yemen.

Since the onset of aggression, the Yemeni army, backed by fighters from the country’s popular Houthi Ansarullah movement, has been defending the impoverished nation against the invaders.  The coalition is also resolute to crush the movement as another goal in its war on Yemen, which is teetering on the edge of famine.

The aggression is estimated to have left 56,000 Yemenis dead.  More than three and a half years into the war, Saudi Arabia has achieved neither of its objectives. Riyadh had declared at the start of the invasion that the war would take no more than a couple of weeks.

The situation has worsened in Yemen in recent months due to a broad economic collapse after a full-scale offensive by UAE forces, backed by armed militia loyal to Hadi, was launched against the Houthi-held port city of Hudaydah in June.

More than 70 percent of Yemen's imports pass through the docks of Hudaydah, which is currently under a tight siege imposed by the invaders.

The so-called liberation operation, however, failed to achieve its objective of overrunning the vital port and defeating Houthi fighters.