81 migrant children separated from families by U.S. since June 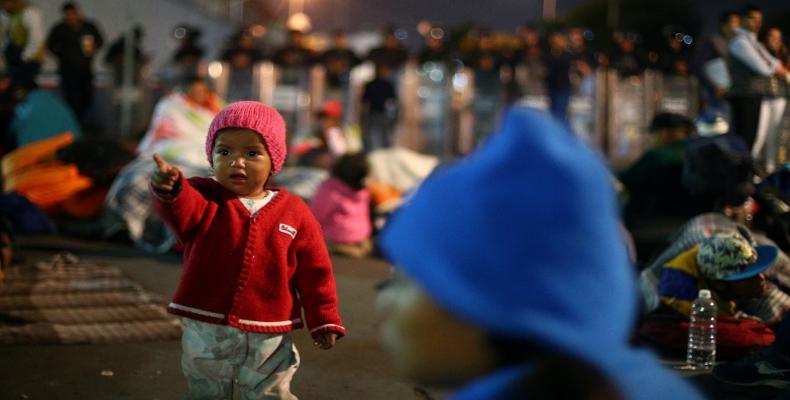 Washington, December 24 (RHC)-- The administration of United States President Donald Trump separated 81 migrant children from their families at the U.S.-Mexico border since late-June, according to government data obtained by The Associated Press.

Amid a crackdown on illegal border crossings, an executive order was issued in June to halt the practice of separating families, AP reports.

However, despite that order and a federal judge’s ruling that followed, immigration officials are still allowed to separate children from their guardians in certain cases -- such as in instances where serious criminal charges have been brought against a parent, if government officials have concerns over the health and welfare of a child, or if there are medical concerns.

The executive order released June 20, 2018, refers to non-U.S. citizens immigrating to the U.S. and asylum seekers as “aliens,” and states that “the Secretary shall not, however, detain an alien family together when there is a concern that detention of an alien child with the child’s alien parent would pose a risk to the child’s welfare.”

Immigrant rights groups and advocates fear that parents are being falsely labeled as criminals because the decision comes down to government authorities.

Of the 76 adults separated from the kids, 51 were criminally prosecuted -- 20 for unspecified reasons, 10 had ties to gangs, nine were hospitalized, four had warrants for extradition, and two had orders of removal due to previous immigration violations, according to the government data obtained by AP.

“Separations are rare. While there was a brief increase during zero tolerance as more adults were prosecuted, the numbers have returned to their prior levels,” said Katie Waldman, a spokeswoman for the Department of Homeland Security (DHS) which manages U.S. immigration enforcement.

Waldman said the government’s data demonstrated “unequivocally that smugglers, human traffickers, and nefarious actors are attempting to use hundreds of children to exploit our immigration laws in hopes of gaining entry to the United States.”

Some 170 cases since April, in which children and their guardians were considered unrelated, and then subsequently separated, could very likely have included cases in which relatives did not have proof of their relationship on hand.  Many people fleeing harsh conditions of poverty and violence in Central America, a region that has been historically disrupted by U.S. economic and political interference, leave in a hurry without formal documents.

Rejoining families is all but impossible in many cases.  When the policy took hold, there was no designated system that would track parents and children. This was partially due to a procedure in which after 72 hours children are turned over to the Department of Health and Human Services, which is a separate agency.

Currently, thousands of migrants who make up an exodus from Central America, mostly from Honduras which has one of the highest rates of homicides with impunity in the world, are awaiting entry to the U.S. in makeshift shelters in the Mexican border town of Tijuana where they are subjected to xenophobia, sparked in part by the town’s mayor.

The migrants, families, unaccompanied minors, pregnant women, and infants among them have traversed thousands of miles along a harrowing journey in the hopes of reaching the United States.