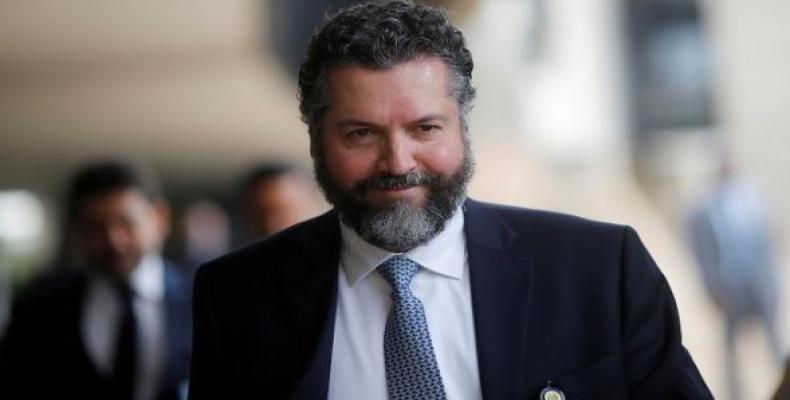 Brasilia, January 11 (RHC)-- Brazil’s new far-right President Jair Bolsonaro has formally removed the South American country from the UN migration pact in the name of “sovereignty and the preservation of national values.”

The international agreement enjoyed the support of former President Michel Temer, but Bolsonaro was clear about his position as soon as it was signed in Morocco on December 19, 2018.

“Brazil has the sovereignty to decide if it takes immigrants or not,” he wrote in his Twitter account just as the Foreign Ministry announced Brazil’s adherence to the pact.

The 'Global Compact for Safe, Orderly and Regular Migration' (GCM) was signed and endorsed by 152 member states; only the United States, Hungary, Israel, the Czech Republic and Poland voted against it.    The agreement aims to address the international migration phenomenon while respecting basic human rights by banning mass deportation and taking measures for inclusion and social cohesion.

But Bolsonaro’s argument goes beyond national sovereignty: he wants anyone intending to migrate to Brazil to respect Brazilian culture.

“Whoever comes here must abide to our law, rules and customs, should sing our anthem and respect our culture.  Not just any person can enter our home and not any person will enter Brazil using a pact adopted by third parties,” said Bolsonaro.

The new Brazilian Foreign Minister Ernesto Araujo argued the country can’t “leave the doors totally open for whoever wants to come inside.”

But Aloysio Nunes, Araujo’s predecessor, thinks the new administration is misunderstanding the pact: “There’s a fallacy repeated by far-right xenophobic narratives that claim the pact overrules states’ sovereignty,” said Nunes.  The pact is based on recommendations and “reaffirms the sovereign right of states to determine their national migration policy and their prerogative to govern migration within their jurisdiction, in conformity with international law.”

The former foreign minister said the pact also aims to protect nationals living abroad, and stepping away from it will affect about three million Brazilians living in foreign countries, much more than the million foreigners that make up only 0.5 percent of the population in Brazil.

Juliano Cortinhas, International Relations professor at the University of Brasilia, told teleSUR: “The pact doesn’t impose any specific restriction on the countries and that doesn’t damage our sovereignty, as the president claims.  “On the contrary, it's a multilateral declaration of co-operation on human rights.  The decision was completely ideological, as the country is now aligning with the will of a small group of diplomats and politicians totally controlled by the United States.”

Cortinhas thinks the decision will have serious regional consequences as Brazil might lose the international leadership it enjoyed in previous administrations.  “Brazil’s international behavior is leaning more to unilateral or bilateral acts.  Therefore, the concept of ‘region’ is losing importance at the time of analyzing our decisions,” he said.

Brazil has previously welcomed thousands of refugees and immigrants from Syria, Lebanon, Palestine and other Middle Eastern and Latin American countries for decades.