Human rights activists in U.S. protest in support of migrants 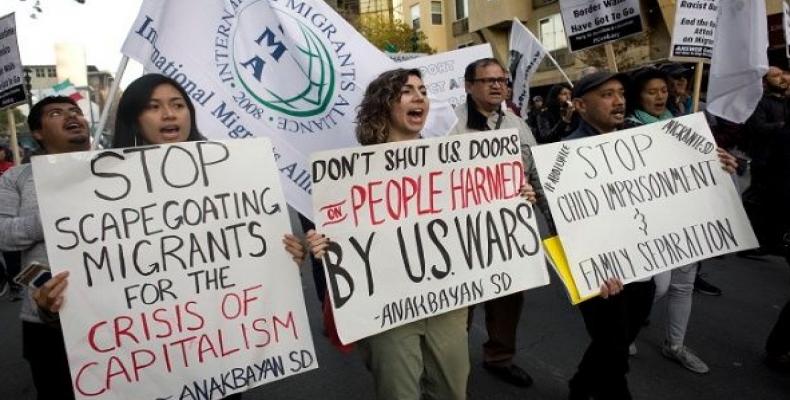 San Diego, January 14 (RHC)-- In the U.S. city of San Diego, California, dozens of people took to the streets to show support for Central American migrants who are still waiting at the border for U.S. authorities to receive their applications for asylum.

In the first of two days of planned mobilizations, San Diego's human rights defenders began their march outside the Mexican consulate.  Then, they left for the offices of U.S. Customs and Border Protection (CBP), and finally, reached the local headquarters of the U.S. Immigration and Customs Enforcement (ICE).

Their objective was to pressure Mexican and U.S. authorities to respect the rights of those who fled their country because of violence and extreme poverty.

"This is perhaps a new form of migration... a situation where immigrants together find security and support for a cruel migration path," Adriana Jasso, an activist from the Committee of U.S. Friends in San Diego, said.

To prevent shelters from being overwhelmed by the high influx of asylum seekers, San Diego County authorities approved a plan to install a temporary shelter for immigrants who are released from federal custody.

The governor of California, Gavin Newsom, also approved a fund for a community response program, which will support nonprofit organizations with their services to migrants.

The San Diego activists have forcefully questioned the White House rhetoric on the border security crisis, as well as criticized the response of federal agents who use tear gas to disperse immigrants approaching the border wall.

"While [President] Donald Trump launches tear gas against immigrants, we have the solidarity of many doctors and lawyers who are supporting Tijuana," Antonio Arizaga, vice president of the International Migrants Alliance (IMA), said.

The massive exodus of Central American migrants to the United States began on October 13, 2018. The first migrant caravan started with a thousand Hondurans who left San Pedro Sula, Honduras and arrived at the U.S. southern border to seek asylum.

It was followed by a second caravan of about a thousand Hondurans, who left Esquipúlas, Guatemala, and by three other caravans made up of Salvadorans.

According to information that has been making the rounds on social networks, a new Central American migrants caravan is forming in the city of San Pedro Sula, Honduras, and will soon be travelling to the North.

Guided by the motto "In Honduras They Kill Us," the migrants plan to gather to leave together towards Mexico.