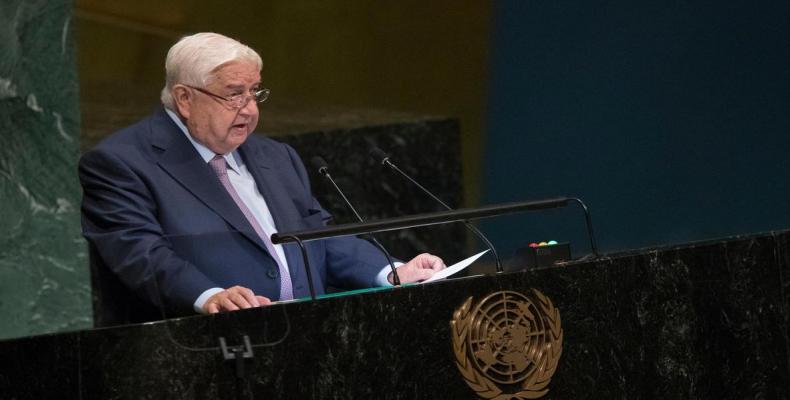 United Nations, September 29 (RHC)-- Syrian Foreign Minister Walid al-Muallem has slammed as “illegal” the military presence of the U.S. and Turkey in northern Syria, demanding an immediate withdrawal of all foreign forces from his country.

"The United States and Turkey maintain an illegal military presence in northern Syria," Muallem said in his address to the 74th session of the United Nations General Assembly at UN headquarters.

“Any foreign forces operating in our territories without our authorization are occupying forces and must withdraw immediately,” he said, asserting: “If they refuse, we have the right to take any and all countermeasures authorized under international law.”

The United States has kept around 1,000 troops in Syria with the purported aim of tackling Daesh terrorists.  Turkey, too, has already launched two military incursions into northern Syria to stop the advance of Daesh and Kurdish militants.

Muallem also criticized Ankara-Washington talks on establishing a so-called safe zone in the area, saying what they are planning is a “violation of international law and the UN Charter.”

Last month, the U.S. and Turkey agreed to set up the buffer zone to the east of the Euphrates River between the Turkish border and Syrian areas controlled by U.S.-backed Kurdish militias, which Ankara views as terrorists affiliated with the homegrown Kurdistan Workers’ Party (PKK) militant group.  The zone is also said to be aimed at settling around one million displaced Syrians.

The Syrian government -- which has authorized neither the Turkish nor the U.S. military activities on its soil -- has slammed the U.S.-Turkish agreement, labeling it as a violation of Syria’s sovereignty and territorial integrity as well as international law.

Muallem also lashed out at Turkey for providing “terrorists with all forms of support, including weapons that are more sophisticated,” adding that Ankara’s action undermines all agreements reached during the Astana talks in Kazakhstan.

“If Turkey is truly committed to the security of its borders and the unity of Syria, as it claims, it must choose whether to respect the Astana understandings and the bilateral agreements on counter-terrorism to secure the borders and to withdraw its forces from Syria, or to be the aggressor and the occupier – and to face the consequences,” he said.

Muallem said that “any agreement about any part of Syria without the consent of its government is condemned and rejected” by Damascus.  He said a peace process should be owned and led by Syrians without any foreign interference.

Elsewhere in his remarks, the Syrian foreign minister reaffirmed his country’s determination to uproot terrorism.  “We are determined to continue our war against terrorism in all its forms until rooting out the last remaining terrorist,” he said.

He expressed regret that countering terrorism “has yet to become a priority for certain countries that remain deathly silent in the face of brutal terrorism facing countries like my own,” saying “putting an end to this global nightmare, which haunts everyone, requires a genuine international will.”

He further blasted the Israeli regime for supporting “terrorism on a daily basis” and launching attacks “on Syrian territories and on the territories of neighboring countries under false pretexts.”  He said that Israel’s actions are “in flagrant violation of international law, the UN Charter, and relevant Security Council Resolutions.”

“These Israeli violations would not continue and escalate if it were not for the blind support of certain countries that are fully responsible for the consequences of Israel’s actions,” he said.

Israel has launched recurrent attacks on Syria in defiance of all international laws and regulations.  The regime claims the attacks are targeted at Iranian positions but such raids are widely viewed as a means of support for the Takfiri terrorists, who have been taking stinging blows from the Syrian army in recent years.

Syria has condemned the Israeli attacks while rejecting the regime’s claims about the presence of any Iranian forces in the country.  Iran has also announced that it has no forces operating on the ground in Syria and has been only offering military advisory support to Syria at the request of the Damascus government to enable its army to speed up its gains on various fronts against terror outfits.