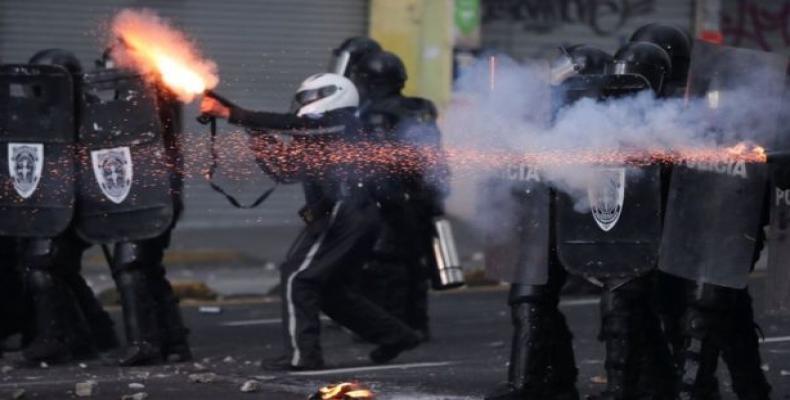 As of Thursday morning, roadblocks by protesters remain in key areas such as Carapungo, the northern exit out of Quito, while Indigenous protesters are concentrated in the center of the city, near the National Assembly.

CONAIE, an Indigenous group involved in the protest, says they will publish a report in the coming days giving full figures of those killed and injured. This follows the death of Inocencio Tucumbi, an Indigenous leader in Cotopaxi.

Civil society groups are also reporting that over 800 are currently detained, including 13 journalists. Furthermore, at least 500 are reported injured.  There were also attacks on Wednesday night against a humanitarian center near Salesiana University. The area provided refuge and shelter for Indigenous marchers, which during the night police attacked the area with tear gas. Ecuador’s Interior Minister Maria Paula Romo has since apologized for the attack.

The police crackdown has received widespread condemnation. The 'Madres de la Plaza de Mayo' -- a leading human rights group in Argentina, formed by mothers whose children disappeared during the dictatorship -- posted a video Wednesday denouncing the repression, saying: "In the name of the mothers of the world: stop repressing! The peoples are determined not to let us be defeated."

"This government is clinically dead, it has no way out...they are trying to control the situation with the most brutal repression of which there is memory," former leftist President Rafael Correa said hitting out at the police brutality, speaking to an Argentinian radio station.

Political figures sympathetic to protesters have also been targeted. The governor of the Pichincha region Paola Pabon, from Correa's Citizen's Revolution party was told by the interior minister that she will have to 'face justice', to which Pabon said, "I am not afraid of your regime, nor your repression or persecution."

Protests show little sign of abating as Indigenous groups deny government claims that there are negotiations ongoing to bring the uprising to an end.  Protesters maintain their opposition to the government's austerity package that followed a multi-billion dollar loan from the IMF.