Brazil’s Bolsonaro faces probe after hospitals run out of oxygen 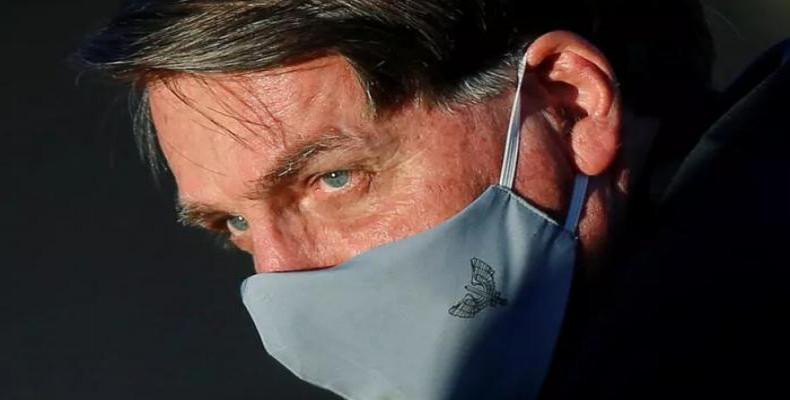 Brasilia, February 6 (RHC)-- Brazil’s prosecutor-general has opened a preliminary investigation into the country’s president and health minister for possible negligence in response to the COVID-19 outbreak in Manaus city, according to a document seen by the Reuters news agency.

Located deep in the Amazon rainforest, Manaus has been hit hard by a brutal second wave of cases that has stretched emergency services to breaking point.  The city’s hospitals ran out of oxygen in January, prompting the federal government to fly in supplies from across the country in an attempt to save people from suffocating to death.

The region is also the birthplace of a coronavirus variant, with similar mutations to those from Britain and South Africa, that researchers say is more transmissible and may be worsening the situation in the city.  The probe into President Jair Bolsonaro and Health Minister Eduardo Pazuello, revealed by Prosecutor-General Augusto Aras in a document sent to Supreme Court Justice Ricardo Lewandowski, follows requests by eight federal congressmen from the far-left Communist Party of Brazil for an investigation.

In the document, Aras said he had begun an “initial inquiry”. This can precede a more formal investigation known in Brazil as an “inquerito,” a type of probe that would require the court’s approval.  “If, eventually, reasonable indications of possible wrongdoing come to light … a request for the beginning of an ‘inquerito’ will be submitted to the Supreme Court,” the document read.

Last year, a group of unions representing Brazilian health workers had also urged the International Criminal Court (ICC) to investigate Bolsonaro’s government for crimes against humanity over its handling of the pandemic.

On Thursday, a social media post by a teleSUR TV correspondent showed protesters in Parana State protesting against Bolsonaro’s handling of the pandemic, accusing him of genocide and asking him to resign.  Last week, Lewandowski authorised the opening of an “inquerito” into Pazuello’s conduct in relation to the situation in Manaus, but that probe does not involve Bolsonaro.

The office of Brazil’s solicitor-general, which is responsible for defending Bolsonaro and the health ministry declined to comment.
The Bolsonaro administration has also been accused of acting slowly in acquiring vaccines, thus delaying its vaccination roll out.  The delays leave Brazil’s 210 million residents vulnerable to one of the worst coronavirus outbreaks on the planet.

As of Friday, Brazil has reported at least 228,000 deaths from COVID-19, second only to the United States, according to data from Johns Hopkins University. It has begun a vaccination campaign but less than 0.5 percent of the population have so far received the shot.

While many nations have struggled to obtain vaccines as manufacturers strive to meet global demand, Brazil was better positioned than many. It has a long history of successful inoculation drives and its state-funded production facilities can churn out vaccines at scale.

The federal government squandered those advantages, said Marcia Castro, a native Brazilian and professor at the Harvard TH Chan School of Public Health in Boston in the United States.  “It’s a succession of errors that began from the start of the pandemic,” she said. “And sadly, we’re measuring those mistakes in the number of deaths.”

Bolsonaro – who contracted the coronavirus last year and says he will not take any COVID-19 shot – has defended his government’s vaccine roll out. “With respect, nobody would do better than my government is doing,” he said in a January 15 television interview.  The right-wing Brazilian president has also downplayed the pandemic, comparing the virus to a “little flu” and attacking stay-at-home measures imposed by local authorities to contain its spread.

Police observe area during Friday prayer following a shooting in Hanau near Frankfurt in front of Sehitlik Mosque in Berlin. (Photo: AFP)

Berlin, February 6 (RHC)-- Germany has reported a record rise in the number of crimes committed by far-right extremists in the country, last year.  Police recorded more than 23,080 far-right related crimes in 2020, which was 700 more than what occurred in the previous year.

The provisional figures for last year include 1,054 violent crimes, which led to at least 307 injuries.  The figure, published by left-wing lawmaker Petra Pau, could yet rise.  Pau, the vice-president of the German Bundestag said that she was “not surprised” by the latest figures.  “The acceptance of violence as a replacement for politics is rising,” she said.

Pau also said that the coronavirus pandemic had acted as a “booster” for far-right crime in the country.  Germany has recently witnessed a wave of attacks by far-right elements targeting minorities and refugees across the country.

Last month, assailants targeted a mosque in the southwestern city of Baden-Wurttemberg, inflicting material damage to the place of worship.  In the meantime, far-right political parties have managed to secure more votes and support amid the health crisis across the continent.

In France, far-right leader Marine Le Pen has returned to the presidential race, with her anti-Muslim and anti-immigration campaign.  Last week, she proposed a controversial ban on Muslim headscarves in all public places and proposed a new law to ban "Islamist ideologies" which she called "totalitarian and murderous."

Le Pen, who lost the 2017 presidential election to President Emmanuel Macron, would garner 48 percent while Macron would be re-elected with 52 percent, according to a recent poll.  Observers say that the far-right politician is now taking political advantage from a dual economic and health crisis caused by the coronavirus pandemic in the country.

The European nation with a Muslim population of more than 5 million, has long been criticized for undermining basic rights of the Muslim community.  Macron has recently come under scrutiny for describing Islam as “a religion that is today in crisis all over the world.”

His remarks sparked anger in the Muslim world, with millions calling for a boycott of French products as they took to the streets to protest against France.  His government has also failed to condemn French magazine Charlie Hebdo's republication of defamatory cartoons of Islam's prophet.