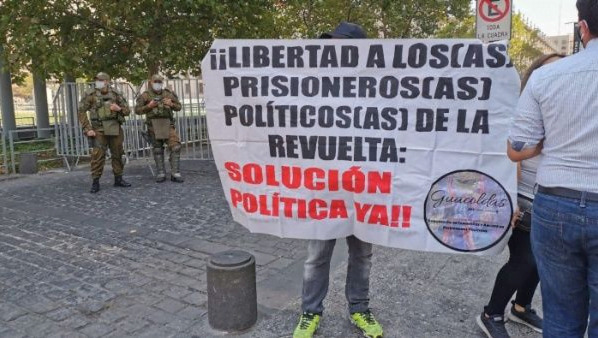 The priest Felipe Berríos denounced that most of these young people have been in preventive prison for more than a year and without receiving visits. | Photo: radio.uchile.cl

Santiago de Chile, April 2 (RHC)-- Different Chilean sectors maintain a public campaign, including social networks, to demand the freedom of all political prisoners of the revolt registered mainly between October 2019 and March 2020 in the South American country.

In a letter, organizations of relatives of political prisoners expressed solidarity with Freedom Astorga, who has been on hunger strike since March 5 in the Nudo Uribe prison, Antofagasta, located in the extreme north of the country.

Astorga, 20 years old, has been in custody for more than a year for allegedly taking a weapon from a carabinero in the context of the social unrest, without any evidence.

The young man, who denounced that he has been subjected to torture, demands the end of his political imprisonment, and if it continues he warned that next April 9 he will begin a dry strike (without ingesting liquids).

The organizations signing the letter asked not to forget "those comrades who have been unjustly imprisoned by a State and a government that seeks to criminalize protest, using preventive imprisonment as a method of punishment, keeping young people in prison, repeatedly postponing trial dates."

At the same time, young people, students and workers from different regions of Chile are carrying out a campaign to demand the release of Tania Sampson, an anthropology student who was violently arrested by plainclothes Carabineros after the march held in Arica (north) in commemoration of International Women's Day 2020.

The trial of Tania Sampson, who spent several months in jail and is now under house arrest, was to be held last Tuesday, but was postponed until later in April.

Jesuit priest Felipe Berríos, interviewed by Radioanálisis, said that the government has carried out a campaign to position these people as guilty of everything that happened, accusing them of being criminals.

However, Berríos affirmed, "in reality they are young people, most of them studying or working, many of them teenagers, and they have not been tried because the evidence is insufficient (...) and most of these young people have already been in preventive prison for more than a year and in times of pandemic where they are not allowed to receive visitors.