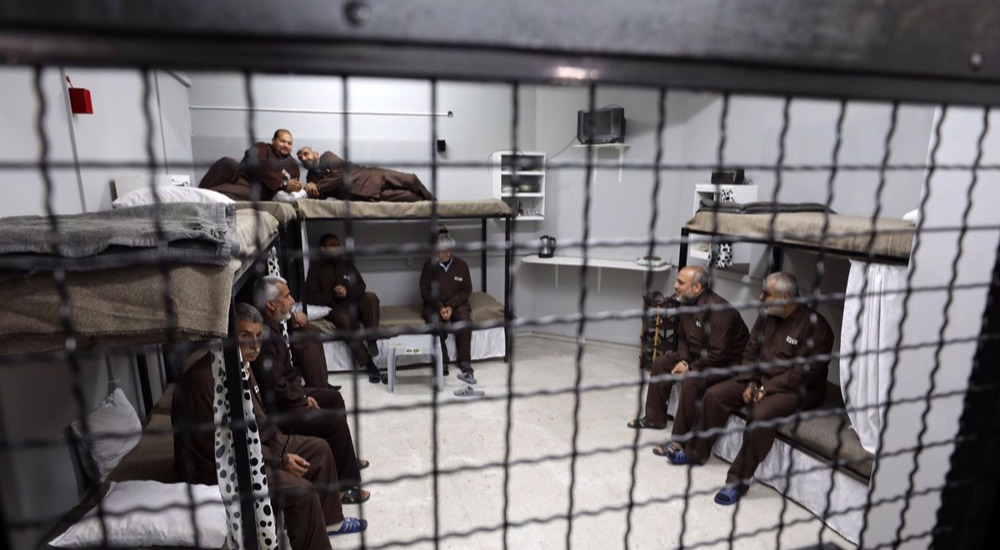 The photo shows Palestinian activists sitting in a mock prison, during a protest in solidarity with Palestinian prisoners in Israeli jails (Photo by Wafa news agency)

Ramallah, August 9 (RHC)-- A Palestinian commission for prisoners says thirteen Palestinian inmates are still on hunger strike in Israeli prisons in protest at their indefinite, unfair and unexplained imprisonment at the hands of the Tel Aviv regime.

In a statement released on Sunday, the Palestinian Commission of Detainees' and Ex-Detainees' Affairs said 40-year old prisoner Salem Ziadat is the longest hunger striker among the thirteen Palestinian inmates, who has been on hunger strike for 28 days in protest at his detention without charge, Palestine’s Wafa news agency reported.

The commission further noted that the number of detainees who were on hunger strike was fifteen until yesterday, when two of them reached an agreement with the Israeli Prison Service (IPS) on limiting their so-called administrative detention, which is a form of imprisonment in which the individual is never tried and can be held indefinitely.

Hundreds of Palestinian prisoners are held under "administrative detention", in which Israel keeps the detainees without charge for up to six months, a period which can be extended an infinite number of times. Women and minors are among those detainees.  The detention takes place on orders from a military commander and on the basis of what the Israeli regime describes as ‘secret’ evidence.

Sixteen Palestinian inmates are currently on hunger strike in Israeli prisons in protest at their detention without charge at the hands of Israel, the Palestinian Commission of Detainees
Some prisoners have been held in administrative detention for up to 11 years.

Administrative detention is illegal under international law. However, the Israeli regime uses it to repress the Palestinian people.

Palestinian detainees have continuously resorted to open-ended hunger strikes in an attempt to express their outrage at the detention. Palestinians hold Israeli authorities fully responsible for any deterioration of the circumstances in jails.

The Israeli parliament, Knesset, has already approved a law which made way for Israel’s prison officials to force-feed hunger strikers if their condition becomes life-threatening.

Palestinian inmates have also been subjected to systematic torture, harassment and repression all through the years of Israel’s occupation of the Palestinian territories.  The IPS keeps Palestinian prisoners under deplorable conditions lacking proper hygienic standards in Israeli jails.  Human rights organizations say Israel continues to violate all rights and freedoms granted to prisoners by the fourth Geneva Convention and international laws.

Rights groups describe Israel’s use of administrative detention as a “bankrupt tactic” and have long called on Israel to bring its use to an end.  According to figures by the Defense for Children International, between 500 and 700 Palestinian children at the age of 12-17 are also arrested and tried in Israeli military courts every year. Israeli forces had arrested more than 17,000 minors since 2000.