ALBA-TCP to address impacts of sanctions on regional development 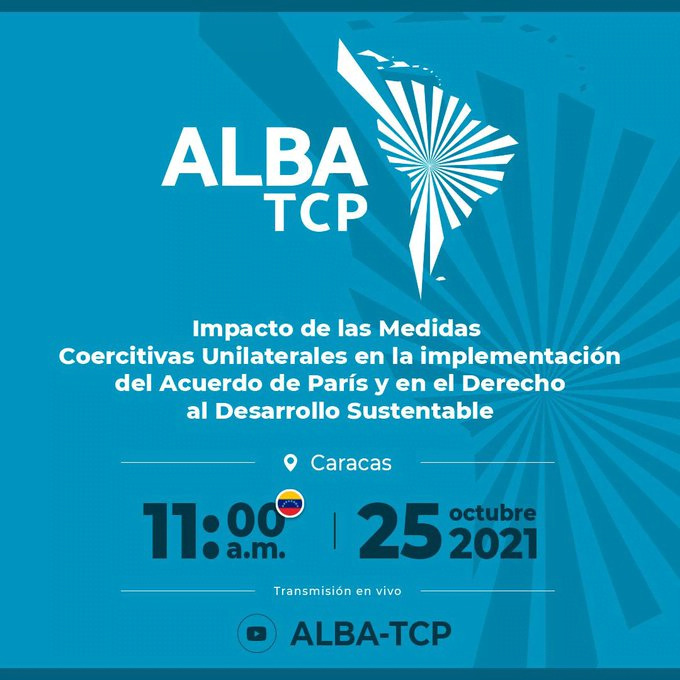 The multilateral organization will discuss the challenge posed by coercive measures for compliance with climate agreements. | Photo: @ALBA-TCP​

Caracas, October 25 (RHC)-- As part of the discussions ahead of the 2021 United Nations Climate Change Conference (COP26), the Bolivarian Alternative for the Peoples of our America-People's Trade Treaty (ALBA-TCP) will address on Monday the impact of unilateral coercive measures on the right to sustainable development.

This was announced by the Secretary General of the integration organization, Sacha Llorenti in a message on his Twitter account.  In addition, it will be discussed how sanctions hinder compliance with the Paris Agreement.  In this sense, the academic event is planned as a prelude to the Glasgow summit, to be held from November 1 to 12 of this year.

On June 24, during the XIX Summit of Heads of State and Government held in Caracas, ALBA-TCP ratified a special agreement to ensure the imperative need to comply with the points of the 2030 Agenda for Sustainable Development.

The member countries highlighted issues related to climate change, the conservation of biological diversity and the fight against desertification, pollution and other phenomena, in order to meet the needs of future generations.

Likewise, they highlighted that the nations' compliance with the Paris Agreement is still insufficient if they want to establish a stable temperature goal, a fact that is essential to decelerate the increase of greenhouse gas emissions and the impact of increasingly devastating meteorological phenomena.

They also criticized that the causes of the environmental crisis are the developed countries with their unsustainable production and consumption patterns, and the unwillingness of governments to fulfill their climate commitments.

Finally, they urged the promotion of more sustainable patterns of consumption and production, and denounced the impact of coercive measures on the response capacity of Latin American and Caribbean countries to respond to the crisis, as the greatest impacts of climate change are felt in this region.