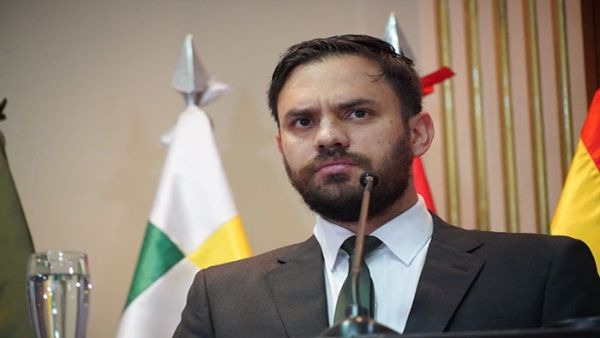 After learning of the usurpation of the Venezuelan Embassy's assets, the Bolivian Executive ordered the deployment of the National Police to recover the items. | Photo: Eduardo Del Castillo Del Carpio

La Paz, January 17 (RHC)-- The Bolivian Minister of Government, Eduardo Del Castillo Del Carpio, has denounced the usurpation of assets of the Venezuelan Embassy in Bolivia by officials sent by Juan Guaidó under the complacency of the then de facto president, Jeanine Áñez, today prosecuted by the Justice in La Paz.

Del Castillo detailed that after the coup in 2019 against Evo Morales, Guaidó with the support of Áñez sent to the country the activists Arturo Vilar Esteves (as alleged minister counselor), Rafael Cáceres (first secretary), Captain Henry José Rivas Pérez (military attaché), Maro Martínez (alleged head of Security, Winston Flores and José Gregorio Cumare (both self-proclaimed ambassadors) as "diplomatic representatives" of Venezuela in La Paz, all the named persons are pointed out of the sale of goods.

"It turns out that these gentlemen named would be participants in the sale of the vehicles of the Embassy, who would have compiled documentation of the vehicles that were in their garage making a copy of the keys and security systems of such vehicles to later sell them to third parties," denounced the Bolivian minister.

According to the figures handled by the Ministry of Government in La Paz, there are 34 missing vehicles -- 15 vans, two cars, one bus, five vans, seven motorcycles, two minibuses and two pickup trucks.  Del Castillo also noted that "a communications antenna, documentation of said vehicles, a firearm, cartridges with ammunition and a gun holster were seized."

After learning of the usurpation of the Venezuelan Embassy's assets, the Bolivian Executive ordered the deployment of the National Police to recover the items, "the communication equipment stolen by representatives of Mr. Juan Guaidó was recovered on January 3, in Radio Chacaltaya (located in the Sopocachi area)," added the minister.

The Bolivian minister apologized to the Venezuelan diplomatic authorities and at the same time, reiterated that the investigations will continue to recover everything usurped by Juan Guaidó and his people.   "We continue with the investigation to find the other vehicles that were stolen, and we hope as soon as possible to also find all the people involved in this shameful event," he said.