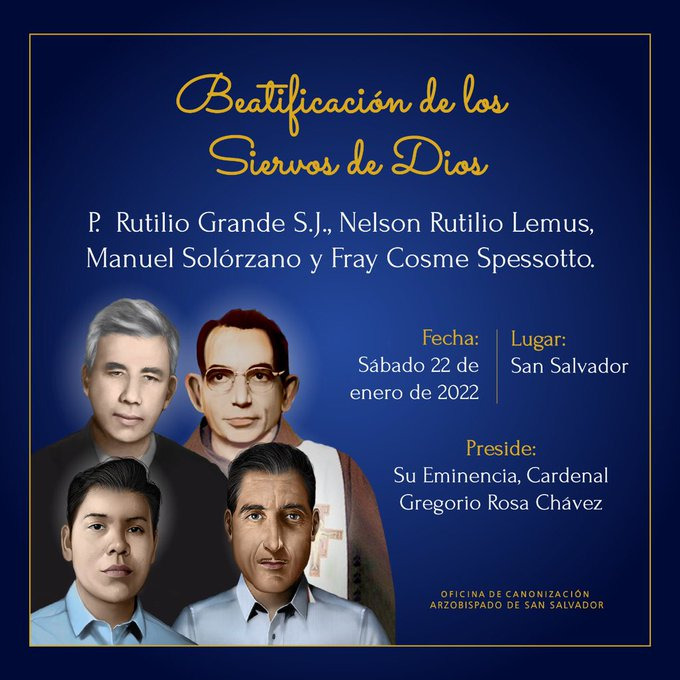 Like Monsignor Oscar Arnulfo Romero (on the left, in the mural), Father Rutilio Grande was an example in placing faith at the side of the poor. | Photo: EFE

San Salvador, January 22 (RHC)-- The Catholic Church of El Salvador confirmed the celebration this Saturday in the capital of that country, San Salvador, of the beatification mass of Salvadorans Rutilio Grande, Nelson Rutilio and Manuel Solórzano, as well as the Italian-born friar Cosme Spessoto, who were killed by death squads in El Salvador between 1976 and 1980.

The liturgical ceremony will take place at Plaza Las Americas, in the Salvadoran capital, starting at 5 p.m. local time.  Thousands of parishioners from all over the country and from abroad will attend the mass, for which strict biosecurity measures have been taken

According to the program, objects that belonged to the priests will be presented, followed by the mass, which will be officiated by the Cardinal and Auxiliary Bishop of San Salvador, Monsignor Gregorio Rosa Chávez.

According to local media, Father Rutilio Grande denounced the injustices committed against the poor.  He was ambushed and shot to death on March 12, 1977, while traveling in a vehicle.

Along with him, sacristan Manuel Solórzano (72 years old) and Nelson Rutilio Lemus (16) were also killed.  They were buried next to Father Rutilio and will also be beatified.

For his work of defense and denunciation, the Franciscan priest Father Cosme Spessotto was also murdered.  He received death threats and was killed on June 14, 1980.

The activities in honor of Rutilio Grande and Cosme Spessotto will last until Sunday and will include tributes for the former in the municipality of El Paisnal and for the latter in San Juan Nonualco, where they carried out their ecclesial work.

The beatification of the four, considered martyrs of the Church, was approved by the Vatican in 2020. Beatification is the previous step to reach the status of Saint of the Catholic Church.