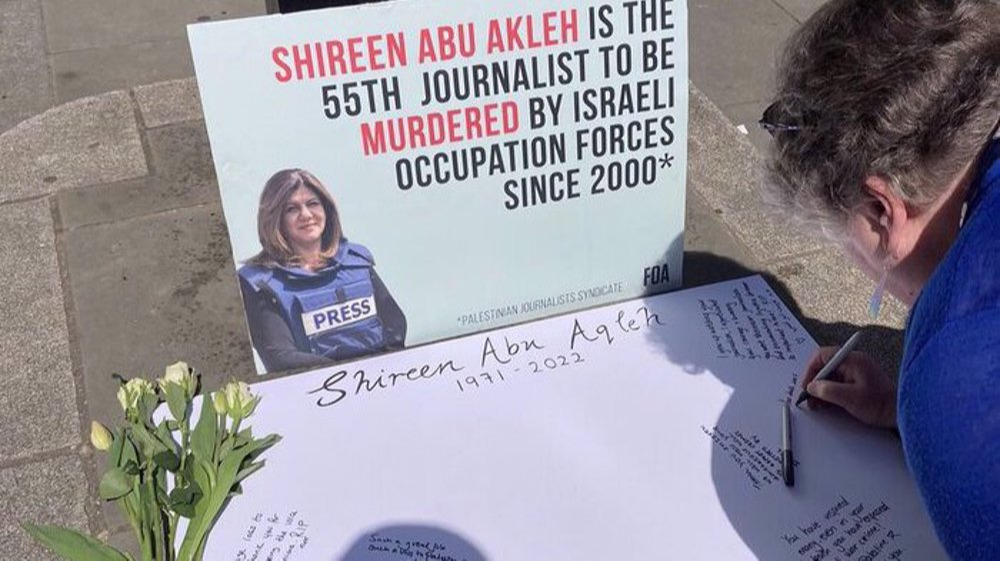 A demonstrator signs a memorial book during a rally in central London, the United Kingdom, on May 14, 2022, as the participants mark the 74th anniversary of the Nakba or “Catastrophe”, and pay homage to slain Palestinian journalist Shireen Abu Akleh, who was fatally shot by Israeli forces during a raid in the occupied West Bank earlier this week. (Photo via Twitter)

London, May 14 (RHC)-- Thousands of people from all walks of life have staged a mass rally in the United Kingdom to commemorate the 74th anniversary of the ‘Nakba,’ or Catastrophe, when more than 700,000 Palestinians were forcibly driven from their homes as Israel proclaimed its illegal existence in 1948.

People gathered in front of Broadcasting House, the headquarters of the British Broadcasting Corporation (BBC), in central London on Saturday afternoon before marching to Number 10, the official residence and executive office of the prime minister, in Downing Street.

The participants waved Palestinian flags, chanted slogans and expressed anger at the ongoing brutal oppression of Palestinians at the hands of Israeli forces.

They also strongly condemned the killing of veteran Palestinian journalist Shireen Abu Akleh, who was fatally shot by Israeli troops as she was covering an army raid on the Jenin refugee camp in the northern part of the occupied West Bank.

The protesters called for a swift and independent investigation to bring the perpetrators to justice. The demonstrators also signed a memorial book in honor of the slain reporter for the Qatar-based and Arabic-language Al Jazeera television news network.

“Shireen Abu Akleh is the 55th journalist to be murdered by Israeli occupation forces since 2000,” a placard put up next to the memorial book read.