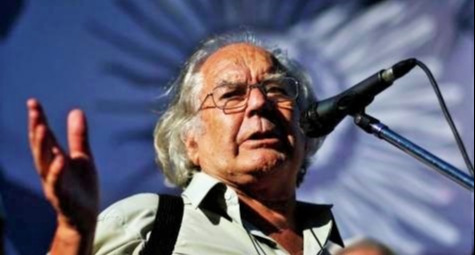 London, May 21 (RHC)-- Nobel Peace Prize laureate Adolfo Pérez Esquivel has called on the British government to block the extradition of WikiLeaks founder Julian Assange to the United States.

According to the Campaign against the Extradition of Assange, the Argentinean intellectual sent a letter to the UK Home Secretary, Priti Patel, who has in her hands the future of the Australian journalist since the London High Court overturned last April a previous verdict against his transfer to the U.S.

After recalling that the first judge opposed Assange's extradition for fear that his precarious mental health would induce him to commit suicide in a U.S. prison, Pérez Esquivel warned Patel that there could be potentially fatal consequences for the cyberactivist if the United Kingdom decides to hand him over to the U.S. justice system.

The United States intends to try the journalist for publishing in WikiLeaks secret files exposing war crimes committed by its military in Iraq and Afghanistan and thousands of compromising documents for U.S. diplomacy.

If tried and found guilty by a U.S. court, Julian Assange, who has been held in a British maximum security prison since his arrest at the Ecuadorian embassy in London in April 2019, could be sentenced to 175 years in prison on the 17 charges against him.

The Argentinean intellectual, winner of the Nobel Peace Prize in 1980, considered, however, that Washington's request is illegal and abusive, so he urged the Minister of the Interior to defend the rule of law and reject the extradition.

He also reminded her that several international organizations, including the United Nations, the Council of Europe and the European Parliament, as well as dozens of heads and former heads of state, have expressed concern about Assange's situation and advocate for his release.

"I join the growing collective concern about the violations of human, civil and political rights of Mr. Julian Assange," added Pérez Esquivel, who also warned Patel that the persecution of the WikiLeaks founder sets a bad precedent for freedom of the press and ratifies the universal jurisdiction of the United States.