WHO warns of forthcoming challenges over COVID-19 and Monkeypox 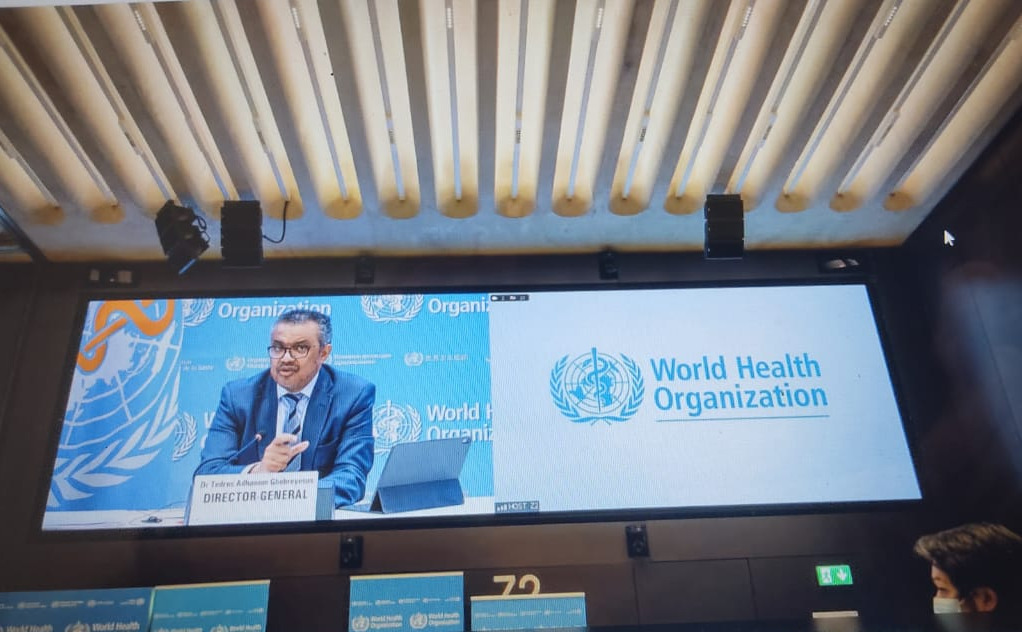 Geneva, May 23 (RHC)-- The world is facing "formidable" challenges, including COVID-19, Monkeypox, and the war in Ukraine, the head of the World Health Organization (WHO) has warned.

Addressing the opening session of the UN World Health Assembly in Geneva on Sunday, WHO chief Tedros Adhanom Ghebreyesus said the “formidable convergence” of the new disease and the ongoing COVID pandemic needed to be dealt with by world leaders.

The summit was called by the UN health agency to discuss the monkeypox outbreak in 15 nations outside Africa.

"Of course, the [COVID] pandemic is not the only crisis in our world,” Tedro said.  "As we speak our colleagues around the world are responding to outbreaks of Ebola in the Democratic Republic of Congo, monkeypox and hepatitis of unknown cause, and complex humanitarian crises in Afghanistan, Ethiopia, Somalia, South Sudan, the Syrian Arab Republic, Ukraine, and Yemen.

"We face a formidable convergence of disease, drought, famine, and war, fueled by climate change, inequity, and geopolitical rivalry," the WHO head added.

Tedros said despite the removal of COVID-19 restrictions in many countries which have made life look more normal, reported cases of the virus were increasing in almost 70 countries in all regions.

He said almost one billion people in lower-income countries remained unvaccinated and the WHO’s primary focus now was to support countries to turn vaccines into vaccinations as fast as possible.

"The pandemic will not magically disappear. But we can end it. We have the knowledge. We have the tools. Science has given us the upper hand," the WHO chief said, adding “it was not over anywhere until it was over everywhere."

"This virus has surprised us at every turn – a storm that has torn through communities again and again, and we still can’t predict its path or its intensity," he pointed out.

On Saturday, the world health body warned that more monkeypox cases are likely to be identified as surveillance expands in non-endemic countries.

The world body’s data indicates that as of Saturday, 92 confirmed cases and 28 suspected cases of Monkeypox have been reported in 12 countries that are not endemic to the new virus.

Monkeypox, first reported in the Democratic Republic of Congo in the 1970s, has resurfaced in recent weeks.  It is caused by the Monkeypox virus, a member of the same family of viruses as smallpox, although its symptoms appear to be less severe and no deaths have been associated with the disease.

The WHO warned that immediate measures to fight the disease should focus on informing those who are most vulnerable to Monkeypox infection with accurate information to prevent further transmission.

To date, the confirmed and suspected cases of monkeypox outside of Africa have been mostly reported in Britain, Spain, and Portugal, as well as Australia, Belgium, Canada, France, Germany, Italy, the Netherlands, Sweden, and the United States.

The UK Health Security Agency has identified 20 cases so far and its chief medical adviser Susan Hopkins was quoted as saying that they are detecting more cases daily.

Health authorities in the U.S. said on Sunday they may have found a third case of the monkeypox virus, running tests on a patient in South Florida to confirm if the person has contracted the disease.

U.S. President Joe Biden, who is on his maiden visit to Asia, warned on Sunday that people should be on guard against the disease which has the potential for a "consequential" impact if it were to spread further.

In the meantime, Austria confirmed its first case of monkeypox in the capital of Vienna on Sunday.  Also on Sunday, the Spanish health minister of the Madrid region Enrique Ruiz Escudero said there were 30 confirmed cases and another 40 under investigation.