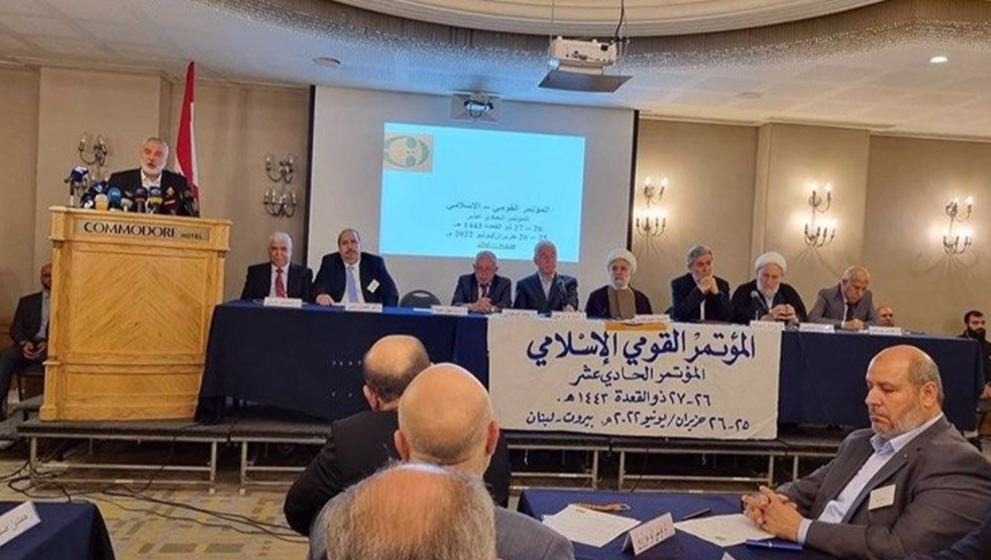 This photo shows Ismail Haniyeh, the head of the political bureau of Hamas, speaking at the National Islamic Conference held in the Lebanese capital, Beirut, on June 25, 2022.

Beirut, June 26 (RHC)-- The head of the political bureau of the Palestinian resistance movement Hamas has denounced as “very dangerous” normalization of relations between some Arab countries and Israel, stressing that full resistance is the only strategic option to confront the occupying Israeli regime.

Addressing the National Islamic Conference held in the Lebanese capital, Beirut, on Saturday, Ismail Haniyeh said there is a plan underway to rearrange the region to suit the American-Israeli agenda, warning that such a plot serves the Zionist enemy by integrating it into the region to confront the resistance front, Lebanon’s al-Ahed news website reported.

“What the region is witnessing is very dangerous. The ‘Israeli’ entity is being integrated into the region through military alliances to confront Iran, Hezbollah and Hamas,” Haniyeh said at the conference convened to discuss the efforts of the Israeli regime to expand its influence in the region through the normalization of ties and its negative repercussions on the issue of Palestine were discussed.

Haniyeh further called for supporting the resistance as a strategic option in Palestine and the region, and for restoring unity among the regional nations.  His remarks came after Israel’s minister for military affairs proposed formation of a U.S.-led regional military front, featuring Tel Aviv and its Arab allies, against Iran.

Speaking this past week, Benny Gantz cited the Israeli regime’s military cooperation with some Persian Gulf Arab countries as well as Egypt and Jordan, saying there were efforts to expand this cooperation.

The U.S. mediated normalization deals between the occupying regime and the United Arab Emirates and Bahrain in August 2020.  Sudan and Morocco followed suit by joining the so-called Abraham Accords.

Saudi Arabia has backed the agreements, and is widely expected to be the next regional Arab state which would forge an official relationship with the regime.

Ganz’s remarks came ahead of a regional visit by US President Joe Biden.  The July 13-16 tour will take Biden to Saudi Arabia and the occupied Palestinian territories.  The visit is expected to bring about more gravitation among the regional Arab states and the Israeli regime.

A senior Iranian military commander says joint military moves by Israel in cooperation with a number of regional Arab countries stem from the regime’s desperation.

Meanwhile, the deputy secretary General of the Lebanese Hezbollah resistance movement, Sheikh Naim Qassem, who was also present at the conference, warned that "the course of normalization is heading towards military alliances with the occupation entity.”  He also stressed that the exclusive and only solution to confront Israel is "resistance in all its forms, and any other solution is a waste of time."

Referring to the efforts of some Arab countries compromising with the Israeli regime to form military alliances with it, Sheikh Qassem said "Israel believes that it will cause concerns in the resistance front through threats, but I say that they are empty threats."

"However, we are fully prepared and we are on full alert about the big maneuver and we are ready every day," he continued, adding, "Today we are in our strongest position with our allies in Palestine and the resistance front."