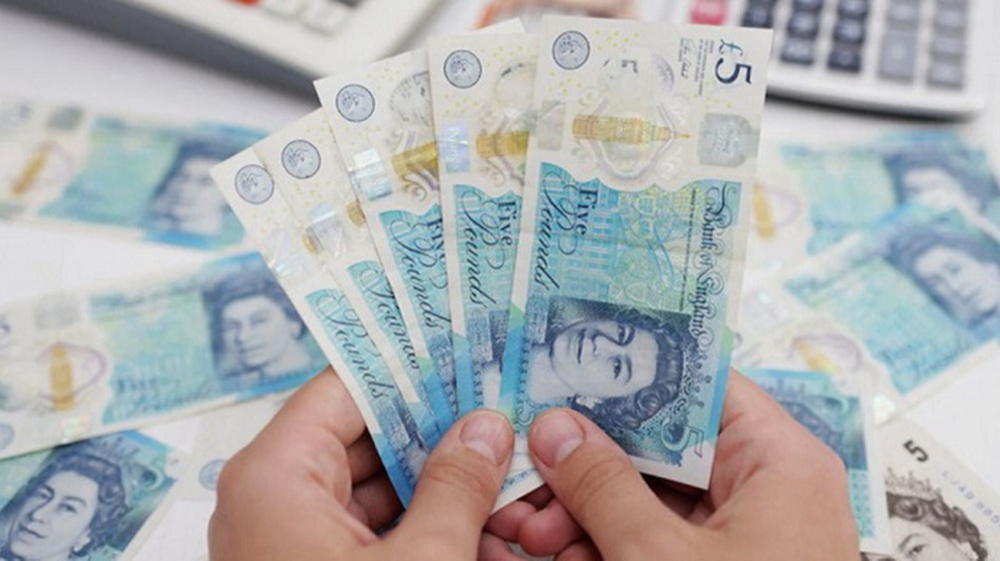 A woman holds British Pound banknotes in this illustration, May 30, 2022. (File by Reuters)

London, September 18 (RHC)-- The UK pound has reached a record 37-year low against the dollar, raising speculations as to whether the British economy is already in recession.  Sterling exchange rate fell by more than 1 percent against the U.S. dollar to $1.1351 on Friday, registering its lowest number since 1985. The currency also hit a 17-month low against the euro, with €1 worth 0.87 pounds.

The weakening of the pound will worsen the impact on UK energy prices, which have been surging through the past months as a result of sanctions against energy-giant Russia for its offensive in Ukraine.

Meanwhile, figures from the Office for National Statistics (ONS) revealed that retail sales across the country fell by 1.6 percent between July and August, increasing the concern among consumers over their regular spending.  According to ONS figures, 82 percent of adults reported “being very or somewhat worried about rising costs of living” in the past two weeks.

The agency further revealed that the fall in sales was broad-based, with petrol stations, supermarkets, clothing, and furniture stores all experiencing a drop.  When asked about the current state of their household finances, more than a quarter of adults said they are unable to save as much as usual.

Olivia Cross, an economist at the consultancy Capital Economics, said all of the indicators show that an economic contraction is already underway and the “cost of living crisis” is set to “hit harder” in the near future.

“The 1.6 percent drop in retail sales volumes in August supports our view that the economy is already in recession. Retail sales will probably continue to struggle as the cost of living crisis hits harder in the coming months. Nonetheless, the Bank of England will still have to raise interest rates aggressively,” Cross said.

Capital Economics estimates that yet another 2.25 percent is needed to be added to the interest rates, raising the current level of 1.75 percent to 4 percent and adding more pain for those with mortgages.  The EY ITEM Club, a leading UK economic forecasting group, also warned of a significant fall waiting for household incomes over the next year.

Martin Beck, the chief economic adviser to the EY Item Club, said: “Real household incomes are still on course for a significant fall over the next 12 months or so. And with unemployment likely to rise, if modestly by the standards of past downturns, and the geopolitical outlook also full of uncertainties, confidence is unlikely to see much of a revival.”

“So, the recession which retailers currently find themselves in is likely to persist through the rest of this year and into 2023,” he added.   The downturn in the British living standards comes on the heels of Liz Truss’ election as the new Tory leader and Prime Minister, who had pledged to revive the UK economy by proposing new plans.