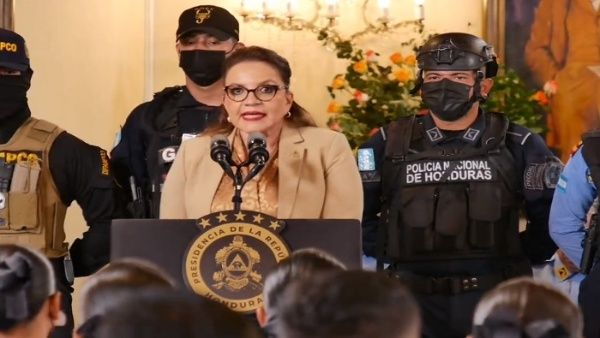 Tegucigalpa (RHC)-- Honduran President Xiomara Castro declared a national security emergency on Thursday to launch what she called a "war against extortion" in the country amid an escalating number of extortion crimes by criminal gang groups.

Tegucigalpa, November 24 (RHC)-- Honduran President Xiomara Castro declared a national security emergency on Thursday to launch what she called a "war against extortion" in the country amid an escalating number of extortion crimes by criminal gang groups.   She said the government will deploy some 20,000 police officers, additional security measures for the highways, and anti-money laundering measures.

The Honduran president unveiled the new strategy to fight extortion that plagues the country in a televised address, which would permit the suspension of several constitutional rights in regions where criminal activity prevails.  The measures went into effect immediately, but the authority still needs to authorize the suspension of fundamental rights.  The proclamation also permits the Honduran government to utilize public funds to combat the criminal gangs involved in kidnapping and drug trafficking.

"With the integral strategy against extortion and related crimes announced today by the National Police, this Government of Democratic Socialism declares war on extortion," Castro said from the José Cecilio del Valle Palace.

Xiomara Castro indicated that the police and the army will be in charge of carrying out necessary operations to dismantle the criminal groups.  The announcement came amid mounting pressure from businessmen, transportation drivers, and NGOs who claim that recent months have seen an increase in extortion, mostly by the Mara Salvatrucha MS-13 and Mara Barrio 18 gangs.

The gangs promise not to harm anyone who pay the "war tax" (extortion money).  People have been paying the taxes out of fear while those who have failed to do have been killed.

This situation affects more sectors in the Central American country, as revealed by a recent report that more than 206,000 households have been victims of extortion so far in 2022.

According to the findings of the report, the population of Honduras could be paying up to a whopping 737 million dollars a year (equivalent to 3 percent of the nation's GDP) to organized crime structures, such that extortion affected more than 847,000 children, youth and adults this year.