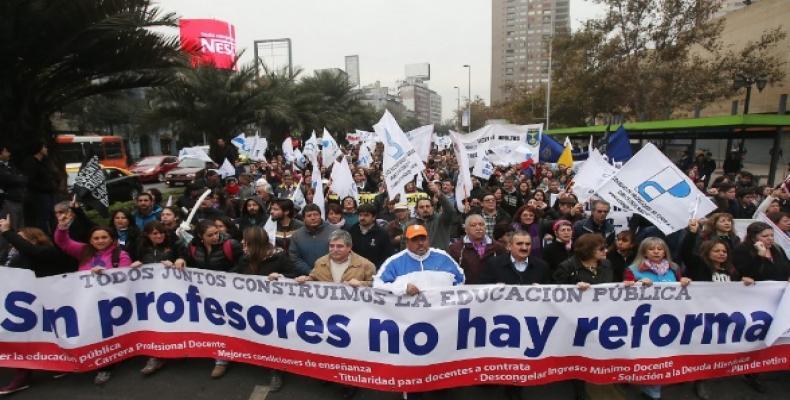 Santiago de Chile, July 04 (teleSUR-RHC) Chilean teachers continued to protest around the country on Friday, after a month of ongoing protests due to a new teachers bill being promoted by the government.

Thousands of teachers marched through Santiago, demanding the government withdraws the proposal. However, teachers are divided, with some of their leaders proposing to end the strike while continuing negotiations.

Representatives from the teachers union, lawmakers and the Ministry of Education have established talks but, after two weeks of negotiations, have not been able to reach a deal.

The new day of protests comes after the national teacher's union failed to reach an agreement with the Ministry of Education to change key aspects of the proposed bill.

The teachers have been on strike for 33 days. The new bill would implement performance tests on teachers, would reduce incentives to enter the teaching profession and increase working hours. Chilean teachers already have to go through three different evaluation processes per year, and several international studies have shown that performance examinations do not translate necessarily in an improvement in the quality of education.

The Chilean government insists that it will not remove the project from Parliament, despite claiming its willingness to negotiate some changes with the teachers.