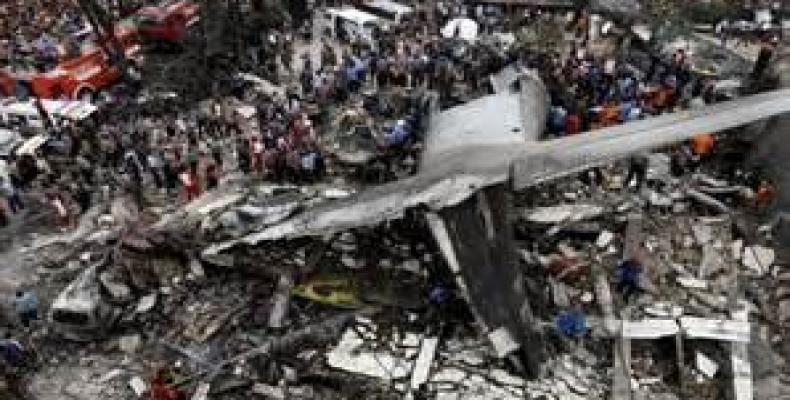 Jakarta, August 18 (RHC)-- Rescuers have discovered the bodies of all the 54 people who had been on board a passenger plane that recently crashed in rugged terrain in Indonesia's east over the weekend.

Search and rescue teams reached the remote crash site and told reporters that the ATR 42-300 twin-turboprop plane was "completely destroyed," adding: "Everything was in pieces and part of the plane is burned. We could see burn marks on several pieces."

Rescuers also said that the plane's black box has been recovered, which could clarify the circumstances surrounding the aviation disaster. There was no information about the 6.5 billion rupiah (470,000 dollars) that the turboprop plane reportedly had on board. The large sum of money was intended to be distributed among poor and needy families as social assistance funds.

The short-haul regional airliner, operated by private Indonesian carrier Trigana Air, was carrying 49 passengers, including five children, as well as five crew members, when it crashed 10 minutes before it was due to land on Tuesday.

The flight had departed from Papua's provincial capital of Jayapura City, and was headed to the far-flung and mountainous settlement of Oksibil. The flight was scheduled to take about 45 minutes.

The incident is the latest to hit Indonesia's aviation sector. On August 12th, one person was killed and five others sustained serious injuries when a Cessna propeller plane operated by the small airline Komala Air crashed in Papua's Yahukimo district. In June, an Indonesian military aircraft went down in the North Sumatra provincial capital of Medan, claiming 142 lives.