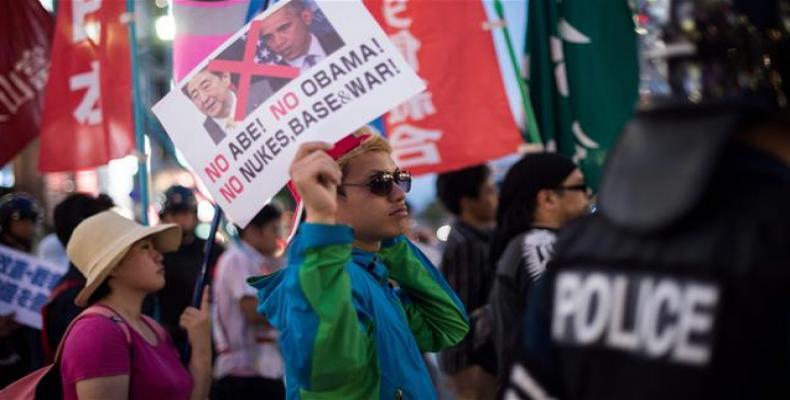 Hiroshima, May 27 (RHC)-- Residents in Hiroshima have greeted U.S. President Barack Obama with protests at the site of the world’s first atomic bombing conducted by the United States more than 70 years ago.

Obama arrived at Hiroshima's Peace Memorial Park on Friday for the first visit by a sitting U.S. president and was greeted by Japanese Prime Minister Shinzo Abe.  But residents of the Japanese city had planned another welcoming, with shouts of "Get Out" and "You're not welcome here."  Many held banners reading: “Remove all U.S. bases from Okinawa.”

One survivor of the bombing, 82-year-old Kinuyo Ikegami, told reporters that she can still here school children screaming "Help me, help me" as the bomb hit on the morning of August 6, 1945.

Obama had previously announced that he would not apologize for the bombing, which killed tens of thousands instantly.

The U.S. president's visit to Hiroshima has stirred heated debate, with critics pointing to paradoxes in Washington's policies relying on nuclear deterrence while calling for an end to atomic weapons.

The U.S. justifies the 1945 bombings, contending that they were necessary to end the war and save lives, although many historians question that view and believe they were unjustified.

Aides say Obama's main objective in Hiroshima is to showcase his nuclear disarmament agenda. However, critics say he has made little or no progress and is spending heavily to modernize the U.S. atomic arsenal.