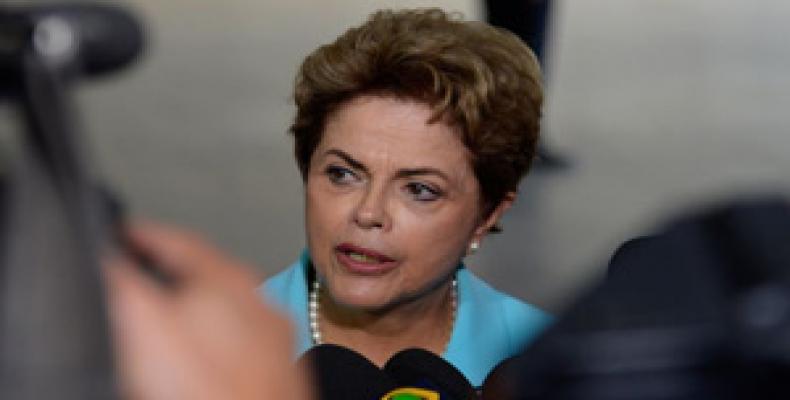 Brasilia, June 2 (RHC)-- In Brazil, suspended President Dilma Rousseff’s lawyer presented the defense for her impeachment trial to the Brazilian Senate on Wednesday evening.  He pointed to recent leaked recordings of high-level opposition figures scheming to evade corruption investigations as evidence that the impeachment bid has involved “misuse of powers” as a form of political revenge against Rousseff.

Rousseff’s attorney Jose Eduardo Cardozo said that several of the leaked statements show that the impeachment attempt took place "not because there is a crime, but there was a concern about investigations into their own involvement in corruption."

The recordings have implicated key political rivals, including two members of installed interim President Michel Temer’s cabinet and the head of the Senate, in a plot to halt corruption investigations targeting bribery in the state oil company Petrobras.  Some of the tapes also reveal that the politicians were secretly conspiring with members of the Supreme Court to help ensure Rousseff’s ouster and an overhaul of corruption probes.

Cardozo argued that the wiretaps offer a “clear” indication of a “strong coordinated component” in the plan to remove Rousseff from office.  “That, to us, reinforces the notion of misuse of power that in the beginning we attributed, solely and exclusively, to lower house president Eduardo Cunha,” he said, singling out the former speaker of the lower house of Congress who spearheaded the impeachment bid against the suspended president.

Cunha, a key architect in painting the impeachment process as a campaign to root out government corruption despite himself facing multi-million dollar bribery and fraud charges, was suspended from his post as chief of the lower house by the Supreme Court over accusations of intimidating lawmakers and hampering investigations. His suspension came just weeks after the lower house approved moving the impeachment process in raucous marathon session.

Now, leaked recordings have solidified arguments that removing Rousseff was a coup and further laid bare that a main motive behind the move was putting an end to investigations against corrupt officials.

Last week, the first tape to burst onto the political scheme showed that interim Planning Minister Romero Juca, also head of Temer’s PMDB party, had conspired with the Supreme Court and military commanders to guarantee Rousseff’s removal as part of a plot to end Operation Car Wash investigations. In a second leak, Senate chief Renan Calheiros planned discussions with the Supreme Court to change key laws directing the fraud probes.

Rousseff was suspended from office for 180 days on May 12 after a 55 to 22 Senate vote decided to make her face an impeachment trial over allegations that she manipulated government accounts to disguise a budget shortfall. Her Vice President Michel Temer was installed as interim president upon her suspension and has swiftly moved to roll out an aggressive austerity plan for the country.

If the Senate, overseen by the Supreme Court, ultimately decides to impeach Rousseff with a two-thirds majority vote after the trial, Temer will be permanently installed as president until 2018.