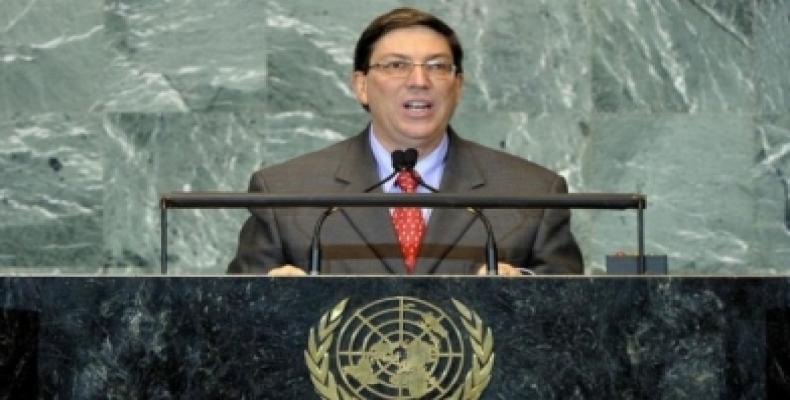 New York, September 22 (RHC)-- Cuban Foreign Minister Bruno Rodríguez, in a speech to the United Nations General Assembly, has condemned the intensification of Washington's blockade against the island and called for an end to aggressive actions against countries of the region.

"These are moments in which aggressive behavior and unilateralism, especially of the United States government, pose unavoidable dangers and dilemmas," Rodríguez said Friday during his address to the 72nd session of the United Nations General Assembly.

During his speech at the United Nations General Assembly on Friday, the Cuban foreign minister referred to the blockade imposed by Washington against his country as "extraordinary and growing."   And he noted that "the blockade intensifies and also its extraterritorial application."

Bruno Rodriguez pointed out that the "unacceptable and aggressive" speech of Trump shows that there has been a setback in bilateral relations between the United States and Cuba.

"I reiterate that the willingness to dialogue with the United States is invariable on the part of the Cuban government, but we will not make any concessions in matters of sovereignty and internal affairs," he added.

Concerning the alleged incidents that have affected several U.S. embassy officials and their family members in Havana, the island's foreign minister reiterated that Cuba strictly observes its obligations to protect foreign diplomats.  He emphasized that Cuban authorities are investigating the matter, which will involve cooperation with U.S. authorities.