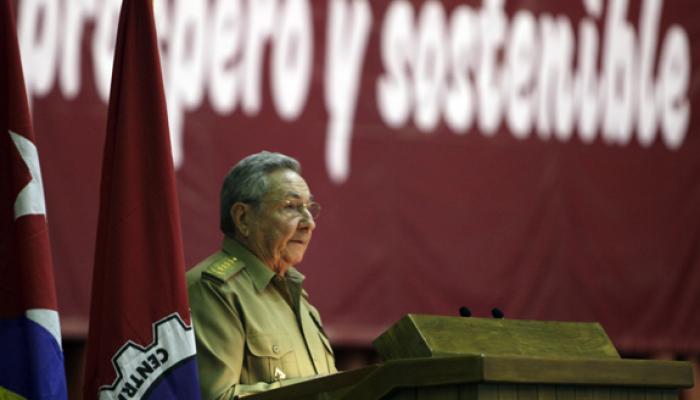 In his closing speech of the 20th Congress of the Cuban Workers’ Confederation, President Raul Castro condemned the violent events that took place in Venezuela and Ukraine, sponsored by US circles of power and European allies.
Raul said that such events confirm that any government that does not abides by the interests of circles of power in the United States and some of US’s European allies, it becomes a target of subversive campaigns.
He said that new subtle and covert methods are being used with this regards, without renouncing to violence in order to break peace and internal order and thus prevent other governments from concentrating in their fight for economic and social development.
Raul Castro described as alarming the situation in Ukraine and he said that the interference by western powers must cease in order to allow the Ukrainian people to legitimately use their right to self-determination. “We cannot ignore that these events may lead to very serious consequence for international peace and security,” he alerted.
The head of state affirmed Cuba’s support of the Bolivarian revolution and its president Nicolas Maduro, who has managed the complex situation with intelligence and firmness.
“We treasure the conviction that the Venezuelan people will be able to defend their irreversible achievements, the legacy of President Hugo Chavez and the government they elected in a sovereign and free way,” Raul stressed.
The Cuban president also underscored the large support by the people of the current update of Cuban economy and he said that the preparatory stage of the workers’ congress revealed the support by the majority of the working class of the ongoing update of our economic model.”
Referring to the salary system in Cuba, he said that the role of salaries are not meeting the principle of socialist distribution, since they do not guarantee that every worker receives a revenue according to his or her contribution to society.
The situation, he noted, causes discouragement and apathy towards work and it also has a negative impact on discipline, while contributes to the exodus of skilled workers to areas where they receive better salaries disregarding their professional levels. However, he said, an integral solution to the problem has been assessed, though no false expectations can be instilled in the people, said Raul as he noted that it would be an irresponsible attitude to implement a general salary increase  in the state sector.
He said that such increase would only lead to inflation of prices if it is not backed by an appropriate growth in the offer of goods and services. Such formula, he said, would be a neo-liberal measure similar to those applied in other regions of the world to preserve and multiply the wealth of the rich against the millions of inhabitants on the planet who are being marginalized.
In revolutionary Cuba nobody will ever be left on his own, while the transformations underway will never affect the social achievements of the Revolution, he stressed.
The economic system that will prevail in Cuba will be socialist, independent and sovereign while it will continue to be based on the people’s ownership of major production means, while state companies will be the main formula of the national economy, Raul said.
He announced the consideration by the Cuban Parliament of a new Foreign Investment Law in March with the aim of encouraging investors.
The 20th Congress of the Cuban Workers’ Confederation was held February 21 and 22 in Havana with the attendance of 1 200 delegates from all Cuban provinces.