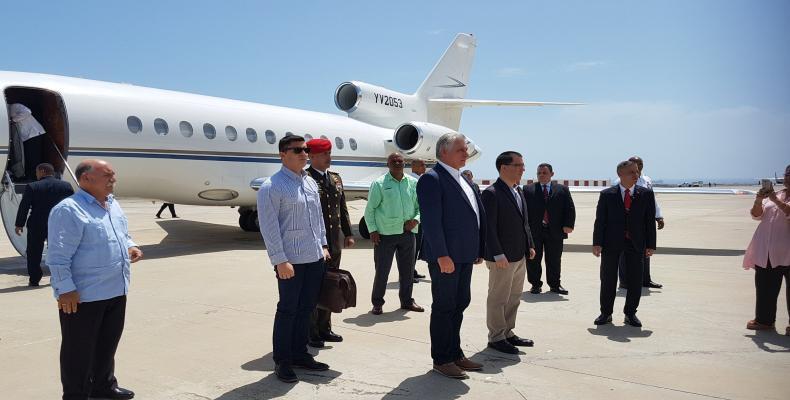 Caracas, July 28 (RHC)-- Cuban president Miguel Diaz-Canel arrived in Venezuela Sunday to participate in the closing session of the 25th Forum of Sao Paulo that have gathered progressive forces of the world in Caracas this week.

“We are arriving in Venezuela when we are commemorating the 65th anniversary of the birth of Commander Hugo Chavez Frias. We are also arriving at a time when Venezuela is hosting, amidst imperialist threats, the 25th edition of the Sao Paulo Forum,” the Cuban leader told the press upon his arrival at Maiquetia “Simon Bolivar” International Airport

Diaz-Canel added that in the forum, he would ratify Cuba’s unconditional support to Venezuela, the Bolivarian Revolution, and the necessity of unity and articulation among all left-wing forces in Latin America and the Caribbean

“To the Venezuelan people, to the Civic Military Union, to the Bolivarian Revolution, and to President Nicolas Maduro, I bring you the embrace of Army General Raul Castro and of all the Cuban people” he said.

While in Caracas the Cuban president will also participate in several activities that will mark the 65th birthday of Hugo Chavez Friaz.