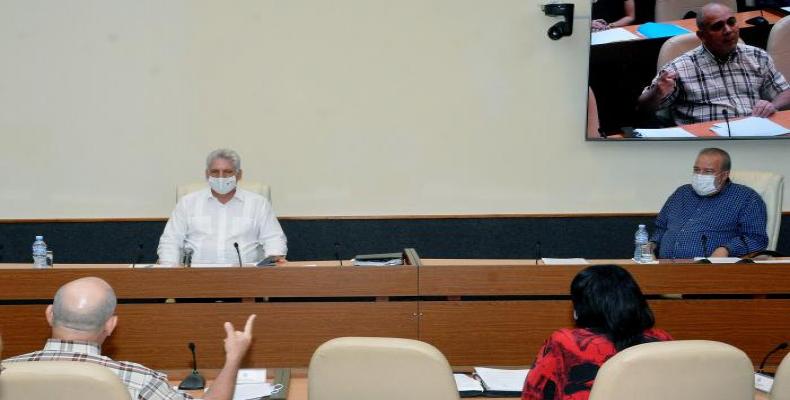 Havana, August 6 (RHC)—Cuban President Miguel Diaz-Canel warned Wednesday about the challenges resulting from new local COVID-19 transmission events reported in western provinces and urged institutions and citizens not to allow a reversal in the progress made on the island against the pandemic.

Speaking at the Temporary Group's daily meeting to fight the pandemic, the head of state noted that the recent spike of cases had been extended in time.

"If we don't control this situation well, if we don't return to the favorable situation we had, we are compromising people's lives and health, and on the other hand,  we are also compromising things as serious as the beginning of the school year, especially in the two provinces that are more complicated".

The president noted that the School Year slated to begin on September 1 is challenging since it would start by recovering what was lost from the previous one and starting the new one.

Diaz-Canel noted that while Cuba will always put its people's health first, the economic impact on the country deriving from these events reported in Havana and Artemisa is also felt.

"Every time there is an outbreak of these, more people are admitted to hospitals and held in isolation centers, and therefore more expenses for care. Every time we quarantine a people's council, a certain community or municipality, we have to deal with a group of organizational issues that also cost us more,"

The Head of State indicated to maintain the vigilance and the hygienic measures that have been proposed, in addition to the sanitary inspection in the most complicated workplaces; in the communities more prone to have outbreaks; and in places like bars, swimming pools and beaches, where in the last days we have also observed relaxation.

"There is no right to rest on the implementation of measures against COVID-19," he said.

During the meeting, the governor of Havana, Reinaldo García Zapata, stated that given the situation in the capital with 131 confirmed cases in the last 15 days, and 160 people evaluated as suspects, authorities are pondering the application of some of the measures belonging to the epidemic stage.

"If we have to go back on some things, we will do so, but we cannot allow the disease to continue to advance in some places due to negligence," he said.

He spoke of the possible closure of bars and swimming pools where the established measures are not followed, as well as the limitation of the movement of people on the streets in the late hours of the night.
"People have to be aware that we are at a time when you can't act deliberately," Garcia Zapata said.