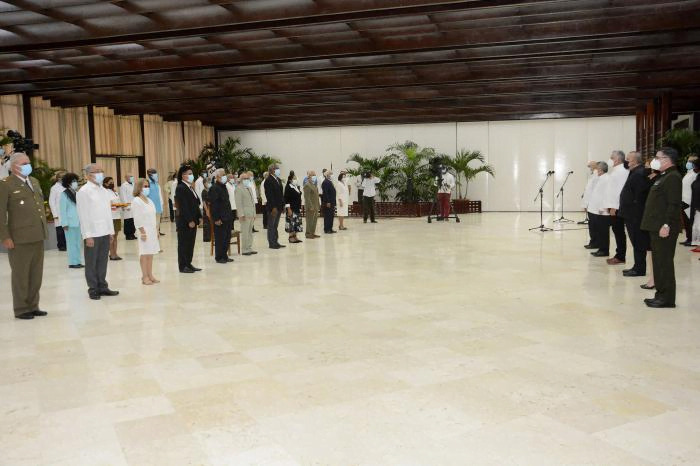 Havana, April 30 (RHC)-- President Miguel Díaz-Canel conferred, by presidential decree, the honorary title of Hero of Labor of the Republic of Cuba to 13 citizens for their labor merits, local press reported today.

During the award ceremony, José Antonio Pérez, a member of the Secretariat of the Cuban Trade Union Federation, emphasized 'the work of dedication, devotion, and altruism of the honorees.'

Presidential Decree 237 established recognizing these workers from different sectors of society 'for their extraordinary merits,' the television said.

'These women and men summarize the work of the military, civilian defense workers, sugar, food and fishing industry, builders, health, hotel, and tourism professionals, who have demonstrated values of patriotism, sacrifice, responsibility, and loyalty to the Revolution', Perez assured.
Among those decorated was the recently deceased Minister of the Interior, Vice Admiral Julio César Gandarilla.

Since 1979 Cuba has awarded this honorary title to Cuban and foreign citizens, it may be granted posthumously, and its representative insignia is the Gold Star of Labor medal.

The date transcends in a context of commemorations that exalt the national history, such as the 62nd anniversary of the triumph of the Revolution, the six decades of the first defeat of Yankee imperialism in America, the 110th anniversary of the birth of the captain of the working class Lazaro Peña and the 95th anniversary of Commander in Chief Fidel Castro Ruz.

On that day, starting at 10:00 a.m., there will also be a Twitter storm of the national CTC in salute to the International Workers' Day.