Due process carried out for alleged rioters in Cuba 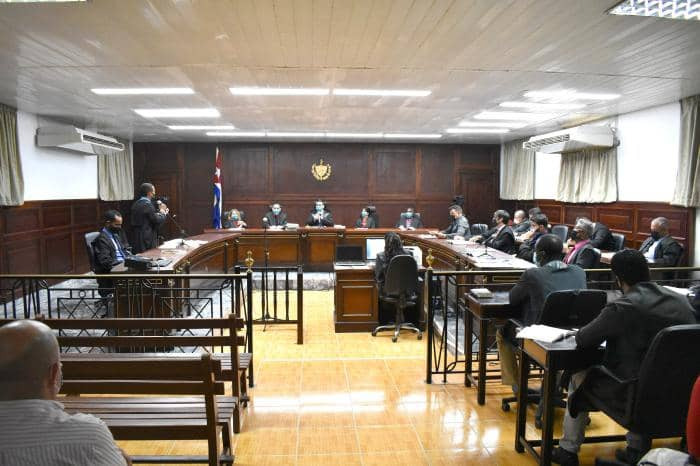 Recognized due process in legal actions for riots in Cuba

Havana, February 5 (RHC)-- The criminal actions that took place on July 11, 2021 during riots in Cuba have been accompanied by the observance of due process, legal assistance, among other guarantees endorsed by the Constitution of the Republic. This was stated by Dixán Fuentes, chief prosecutor of the Directorate of Attention to Citizens of the Attorney General's Office -FGR-, and pointed out that no individual was deprived of his freedom but by a competent authority and the presumption of innocence was respected until the final sentence, just to mention some examples. "All citizens who came to our institution to present doubts, petitions and criteria regarding the facts were attended," said the jurist. Among the answers provided, he assured, is the release of persons without having to answer for any crime, modification of precautionary measures and inclusion of their arguments to be assessed in the specific criminal process.

Lisnay María Mederos, chief prosecutor of the Directorate of Criminal Proceedings of the Attorney General's Office, emphasized that the evidentiary material determined facts that typify the crime of public disorder, instigation to commit a crime, damages, robbery with force and robbery with violence, attack and sedition. In this sense, he emphasized the seriousness of the facts, the extreme violence, the injuries that endangered the lives of people, officials and members of law enforcement officials and the damages to official institutions, in the particular and complex scenario of the country's confrontation with the COVID-19 pandemic.

Yojanier Sierra, president of the People's Provincial Court of Havana questioned the matrix of opinion in social networks that directly attacks the transparency of legal processes. Although these were new crimes for us, we studied the cases thoroughly, and we respected each of the established guarantees, he said. In this sense, all the defendants attended the trial with the representation of a lawyer - hired by them or a public defender - and had the possibility of communicating among themselves to lay the foundations of the defense. In addition, the process has counted with numerous documentaries, expert and testimonial evidence, either by the Attorney General's Office or the defense.

In the words of lawyer Manuel Alonso, who has strongly rejected the evidence presented by the Prosecutor's Office, "there has been no incident, neither in the trial, nor during the process, and the family has not communicated any disagreement to us."  This is corroborated by Eudanis Campos and Keyla Domínguez, mother and wife of two defendants, respectively, who acknowledged the role of the lawyers and the confidence that they will act with justice and rationality. "They are doing their best job," said the latter.

Regarding the criteria that point to the prosecution of minors, attorney Francisco Javier Tapia expressed that the Cuban Criminal Law is categorical in this matter, and states that the minimum age for criminal responsibility is 16 years old. Those perpetrators between 16 and 20 years old have a special protection due to their age and they were given all the attention and differentiated and individualized treatment, acknowledged Beatriz Peña, chief prosecutor of the Department of Investigation and Supervision of the Directorate of Criminal Proceedings of the Attorney General's Office. According to evidence presented by Cuba, the riots of last July 11 are a response to the actions of the United States government to destabilize the internal order on the island, while they are tightening the economic, commercial and financial blockade against the nation.