Britons in solidarity with Cuba prioritize the struggle against the U.S. blockade 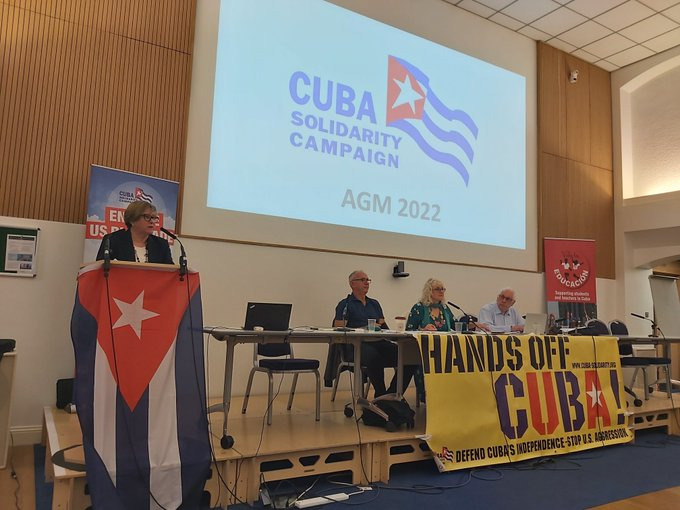 Cuban ambassador to the UK, Barbara Montalvo, addresses participants in the meeting.

London, Jun 4 (RHC)-- The Cuba Solidarity Campaign (CSC) in the United Kingdom agreed on Saturday to prioritize the struggle to lift the unilateral blockade imposed by the United States on the Caribbean island for more than 60 years.

The administration of President Joe Biden continued the policies of aggression and intervention of his predecessor, Donald Trump, and this siege extends its extraterritorial character against the right of other countries to trade with Cuba, says the report approved by the members of the organization at its annual meeting.

During the meeting, which was attended by the Cuban ambassador to the United Kingdom, Barbara Montalvo, and the official of the Cuban Institute of Friendship with the Peoples (ICAP), Elizabeth Ribalta, the members of the CSC pledged to build the greatest possible support for the people of the Caribbean country.

The activists agreed that the blockade represents the main obstacle to Cuba's development and the greatest threat to its people.

With more than 3,000 members, the CSC said that as part of this campaign, they would support the Viva la Educación project, an initiative of the National Education Union of the United Kingdom that promotes exchanges with Cuban teachers and aid for the island's schools.

We will work shoulder to shoulder with the Cuban people, assured via videoconference the director of the international committee of the union, Gawain Little, who highlighted the achievements of Cuba in education, despite the economic, financial, and commercial measures imposed by Washington.

In this regard, the director of the CSC, Rob Miller, pointed out that they will continue working to strengthen their relations with the British trade unions and with the members of the All Party Group on Cuba in Parliament.

The dissemination of positive messages about the Caribbean island to counteract the growing hostility of the U.S. government and the disinformation campaigns orchestrated by extreme right-wing anti-Cuban groups is another area on which the friends of Cuba in the United Kingdom will focus.

At the beginning of the event, Miller recounted the work carried out by the CSC in the last two years, marked above all by the collection of funds and material supplies to help Cuba face the Covid-19 pandemic and the denunciation of Washington's hostility towards Havana.

The ICAP official, Elizabeth Ribalta,  presented the British organization with an award in recognition of its more than 40 years of support to the government and people of the Caribbean island.