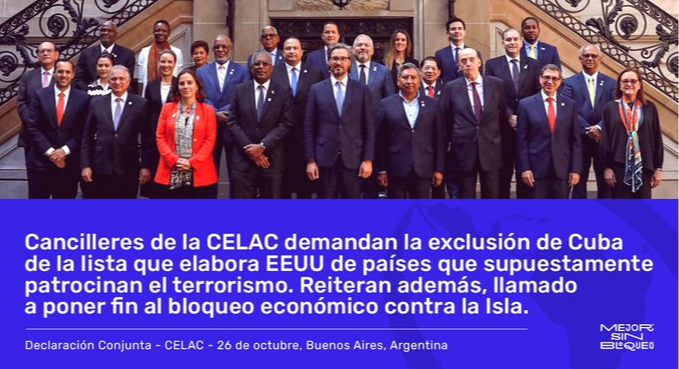 Havana, Oct 27 (RHC) The 23rd Meeting of Foreign Ministers of the Community of Latin American and Caribbean States (CELAC) concluded Wednesday in Buenos Aires, Argentina, with a Joint Declaration condemning the U.S. blockade against Cuba.

The head of the Cuban Ministry of Foreign Affairs (MINREX), Bruno Rodríguez, informed on his Twitter account that the text demands the end of the U.S. economic siege against the island, and highlights the serious damages it causes to the Cuban people.

In addition, it demands the exclusion of Cuba from the unilateral list drawn up by the U.S. State Department of countries that allegedly sponsor terrorism.

In turn, Deputy Foreign Minister Anayansi Rodríguez Camejo expressed on that social network that the Declaration includes concerted positions of the region on relevant issues of the regional and international agenda.

It also reaffirms the commitment to the postulates of the Proclamation of Latin America and the Caribbean as a Zone of Peace. (Source: ACN)