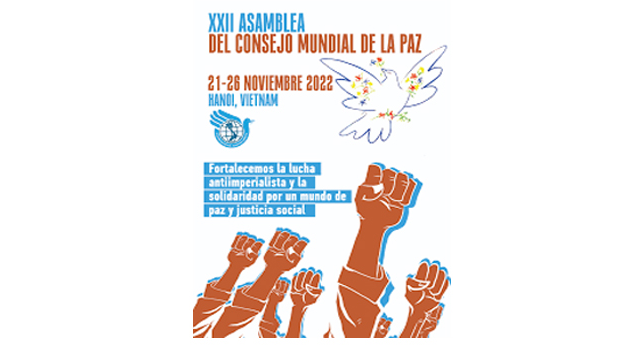 Hanoi, Nov 23 (RHC) The example of internationalist solidarity offered by Cuba in the global fight against Covid-19 was highlighted at the 22nd Assembly of the World Peace Council (WPC), on its second day of sessions in Hanoi.

We would like to highlight the special efforts and achievements of a country, that even without foreign support and despite the enormous challenges posed by a fierce economic blockade, is a champion in the fight against the pandemic, said WPC Secretary General Thanassis Pafilis.

Cuba is an example of international solidarity and has won recognition worldwide, he emphasized.

During the opening day of the meeting, the secretary general of the World Peace Council recalled that "the people paid a very high price during the pandemic" as a result of the years in which great problems were created by transforming health into a commodity and its subjection to the pursuit of profit.

Millions of people did not have access to vaccines, especially in the poorest countries where the percentage of fully vaccinated did not exceed 16 percent, and hundreds of thousands died due to inadequate health systems, he deplored.

In contrast, he said, while 745 million people live in extreme poverty and 11 die of hunger every minute, the wealth of the world's 10 richest billionaires grew by $413 billion in 2021 and nine new billionaires were "born" from the super-profits of pharmaceutical monopolies.

Pafilis further warned that the Covid-19 pandemic pushed back the already existing global economic slowdown in 2019, with the global economy contracting by 4.4 percent in 2020, amplifying the prevailing great social contrasts and inequalities.

He further stated that the World Peace Council stood firm in its solidarity with the people of Cuba and its Revolution, at a time when the criminal and inhuman blockade is taking on greater dimensions, with hundreds of new measures and sanctions imposed by the United States tend to the destabilization of society.

In Latin America, the struggle in defense of the Bolivarian process in Venezuela is increasingly relevant, given the constant threats of destabilization, sanctions, and interference of the local oligarchy in collusion with U.S. and European imperialism, he added. (Source: PL)