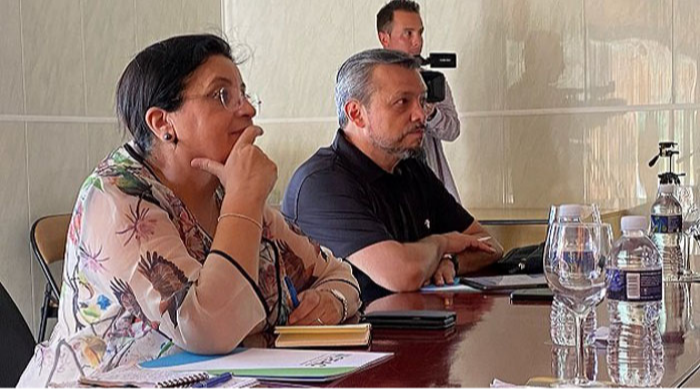 At a press conference, Mokhtar gave details on the IAEA's perspectives. In response to questions from the press, she confirmed that scientific-technical cooperation will continue, especially in the training of specialized personnel and the supply of technologies.

In particular, she mentioned, the support for new projects and initiatives in radiotherapy, plastic contamination, and the project called Rays of Hope, to provide support to Member States in the diagnosis and treatment of cancer through radiological medicine, as well as Nuclear Technology for the Control of Plastic Contamination (NUTEC Plastics).

On both initiatives, she signed memorandums of understanding with Elba Rosa Pérez Montoya, Cuban Minister of Science, Technology, and Environment. She also mentioned the Integrated Measures against Zoonotic Diseases, in conjunction with the National Center for Agricultural Health, its coordinator in the province of Mayabeque.

She pointed out that in coordination with the Food and Agriculture Organization of the United Nations, they plan to accompany the country in obtaining new varieties with a view to contributing to the food security of the population in general.

You should be proud of the Center for Environmental Studies in Cienfuegos, said the Deputy Director General and head of the IAEA Department of Nuclear Sciences and Applications, who toured that facility’s laboratories, equipped with the most advanced technologies, thanks to mutual cooperation.

She even argued that it is not only in a position to assimilate know-how, but also to share it since it has been recognized since 2007 by the IAEA as a Regional Reference Center in the application of nuclear techniques to the solution of specific problems of Integrated Coastal Management.

Regarding the gender perspective in the world in her sector, she emphasized that Cuba carries in its DNA the principle of equality and non-discrimination, in reference to the representation of women in management positions.

Dr. Najat Mokhtar described the results of her visit as very positive and predicted a promising future for the country in its scientific-technological-innovative and environmental development, due to its high professional level and research capabilities.

Cuba is one of the IAEA member states since its foundation 65 years ago and more recently the organization contributed with equipment and technologies to counteract the effects of the COVID-19 pandemic, the raging fire at the Matanzas Supertanker Base, and hurricane Ian in the west of the nation (Source: ACN).