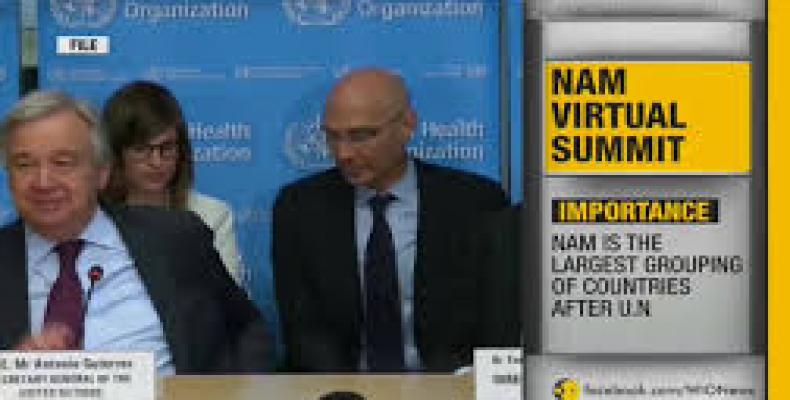 The Republic of Azerbaijan, in its capacity as President of the Non-Aligned Movement, convoked for May 4, 2020 a Virtual Summit, “United against Covid-19.” The Non-Aligned Movement has 120 members nations, which constitutes two-thirds of the members of the United Nations and represent 55% of the world’s population.

Addressing the conference in the early morning of May 4, Cuban President Miguel Díaz-Canel declared that “the high number of infected persons and the substantial loss of human life shows the devastating impact [of Covid-19] on an increasingly interconnected world that, however, has not been capable of ennobling that interconnection with solidarity, and that today pays the price for its incapacity to correct grave social imbalances. We speak with honesty: if we had globalized solidarity as was globalized the market, the story would have been different.

“Solidarity and cooperation are lacking. These values cannot be seen as tied only to profits, which is the nearly exclusive motivation of those who, rendering homage to the market, are forgetting the value of human life.

“When the facts that have placed humanity in suspense during the last four months are reviewed, we will be obligated to recognize the costly errors of neoliberal policies, which have resulted in the diminishing of states, excessive privatizations, and the forgetting of the majority. This pandemic has demonstrated the fragility of a fractured and exclusive world.”

The Non-Aligned Movement is the voice of the colonized. It was founded in 1961 in Belgrade, Yugoslavia by the giants of the era: Sukarno of Indonesia, Nehru of India, Nasser of Egypt, Nkrumah of Ghana, and Tito of Yugoslavia. Osvaldo Dorticós, the President of Cuba, was present in representation of the Cuban Revolutionary Government, the only Latin American nation to be among the founders of the Non-Aligned Movement. The Non-Aligned Movement was founded on the principles of what was then called “the spirit of Bandung,” which referred to the conference of twenty-nine newly independent Asian and African nations in Bandung, Indonesia in 1955. The conference declared the importance of Third World unity to confront European colonialism and Western imperialism. It advocated cooperation rather than exploitation as the foundation of international relations. It sought a restructuring of the world-economy that would bring to an end the assigned role of the colonized peoples as suppliers of cheap labor and cheap raw materials for the former colonial and emerging imperialist powers.

The summits of the Non-Aligned Movement culminated in a proposal to the General Assembly of the United Nations for a New International Economic Order, which also was supported by the Group of 77 and the socialist bloc nations, adopted by the UN General Assembly in 1974. The document of the New International Economic Order affirmed the principles of the right of the self-determination of nations and the sovereignty of nations over their natural resources. It called for the regulation and control of transnational corporations and the promotion of cooperation among the nations of the Third World.

Cuba assumed the presidency of the Non-Aligned Movement in 1979. At the Sixth Summit in Havana, the ninety-three member nations reaffirmed their commitment to the principle of the sovereignty of nations, and they declared “their deep commitment that a lasting solution to the problems of the countries in development can be attained only by means of a constant and fundamental restructuring of international economic relations through the establishment of a New International Economic Order. In the period 1979 to 1982, Cuba, in its capacity as President of the Non-Aligned Movement, reiterated in various international fora the need for the United Nations and the global powers to respond to the desperate economic and social situation of the Third World.

As the global powers turned to neoliberalism, the demands of the colonized were ignored, and the Non-Aligned Movement was highjacked by accommodationists aligned with the global powers, led by “the Asian Tigers”. They called for the end of state-directed development projects, maintaining that the state should interfere in the economy only to ameliorate extreme inequalities. The turn to accommodation to U.S. interests was opposed by a minority within the Non-Aligned Movement, led by Fidel.

Fidel’s speech as outgoing president at the 1983 Summit in New Delhi was at once a scientific analysis, a denunciation of the amorality of the powerful, and a political call to the colonized peoples of the earth, emotionally received by the delegates of the member nations. Subsequently published by the Cuban government as The Economic and Social Crisis of the World: Its repercussions for the underdeveloped countries, its dismal prospects, and the need to struggle if we are to survive, the speech concluded with the declaration that, through unity, the countries of the Third World can attain their noble aspirations, their legitimate interests, and their irrefutable right to sovereignty as an inseparable part of humanity.

On the basis of a global popular rejection of the neoliberal project, because of its evident negative consequences for the peoples, the Non-Aligned Movement began to retake its classic political project of the 1960s and 1970s. The return to its roots began to be visible during the presidencies of South Africa and Malaysia beginning in 2000, but it was Cuba’s second presidency that marked the definitive reestablishment of the classic Third World political agenda. In the Declaration of Havana in 2006, the 118 member states called for a “more just and equal world order,” and it lamented “the excessive influence of the rich and powerful nations in the determination of the nature and the direction of international relations.” It rejected the neoliberal project as promoting global inequality and as “increasing the marginalization of countries in development.” It affirmed the principles of the UN Charter, including the equality and sovereignty of nations, non-intervention in the affairs of other states, and “the free determination of the peoples in their struggle against foreign intervention.” It proclaimed that “each country has the sovereign right to determine its own priorities and strategies for development.” It proclaimed its support for the peoples of Palestine, Cuba, Venezuela, Bolivia, and Iran in their conflicts with the global powers.

In the subsequent presidencies of Egypt, Iran, Venezuela, and Azerbaijan, the Non-Aligned Movement has continued to affirm the historic principles of the movement and to demand compliance with the principals and values that humanity has affirmed and that even the global powers recognize, but deny in practice.

In its capacity as president of the Non-Aligned, the Republic of Azerbaijan convokes reflection of the Covid-19 pandemic from the vantage point of the peoples of the Third World. During the global health crisis, which will lead to an economic and social crisis in the context of the ongoing sustained structural crisis of the world-system, for all seek to understand the true and to do justice, no voice is more important than the collective voice of the colonized.