Cuba denounces aggressive actions in the midst of the pandemic 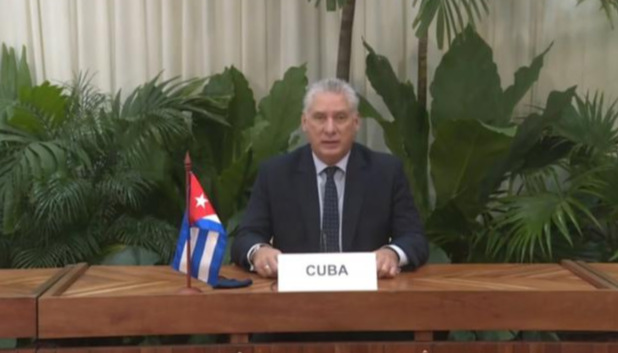 Cuba denounces aggressive actions in the midst of the pandemic

Cuban President Miguel Diaz-Canel emphasized at the 31st Special Session of United Nations that the country’s commitment to the world and humanity is to continue working for solidarity, dignity and social justice.

However, this altruistic will expressed by Diaz-Canel, clashes with aggressive attitudes of nations like the United States, which even in the midst of the global sanitary emergency by COVID-19 maintains and reinforces sanctions that hinder the appropriate handling of the pandemic.

Cuba can set an example, when even in this complex and challenging year, the administration of U.S. President Donald Trump, contrary to what the current moment demands, has intensified its hostile policy against the Cuban people.

Washington has banned humanitarian cargo flights to the island, and has adopted new sanctions that hampered the shipment of donations with necessary supplies for the battle against COVID-19.

Under the terms of the blockade that Washington has maintained for almost sixty years, foreign companies have refused to provide our country with mechanical lung ventilators.

Moreover, in its aggressive actions, Washington has pressured and blackmailed other countries not to request Cuban medical assistance from COVID-19; nevertheless Cuba's willingness to help and share, is a principle of the Revolution and a deeply rooted feeling in our people.

In his speech, Díaz-Canel pointed out that this hostility has not prevented Cuba from assisting 39 countries and territories with over 50 medical brigades to combat COVID-19, which joined those already present in such locations.

Obviously, as the government has repeatedly stated, Cuba will continue extending its helping hand to those in need, and will remain loyal to our traditional solidarity and internationalism.