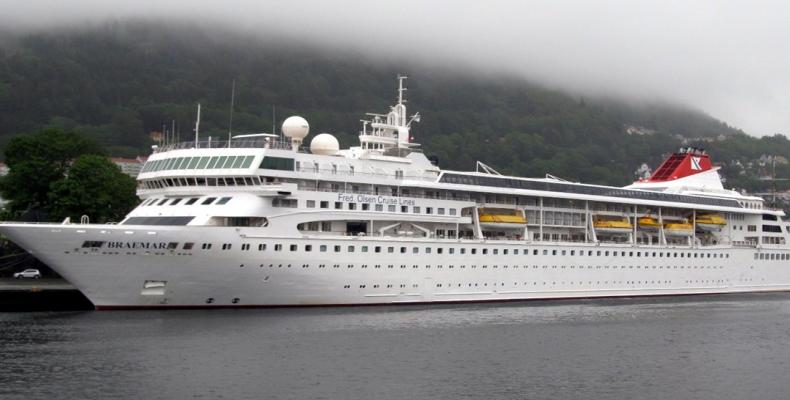 The Nation · by Peter Kornbluh

On March 12, as a British ocean liner approached the Bahamas with almost 50 passengers and crew displaying symptoms of, or diagnosed with, the coronavirus, many on board hoped that their “voyage of the damned” to find a Caribbean nation that would allow them to dock was finally over. The coronavirus-stricken cruise ship, MS Braemar, flew the Bahamian flag; surely the British commonwealth where the ship was registered would be obliged to allow them to disembark for treatment and transportation back to the United Kingdom.

Instead, the Bahamian Ministry of Transport declared that the cruise ship would “not be permitted to dock at any port in The Bahamas and no persons will be permitted to disembark the vessel.” Despite frantic efforts by the British Foreign Ministry and Fred Olsen Cruise Lines, which owns the ship, over the next five days several other Caribbean nations, as well as United States, reportedly denied docking rights.

But on March 18, Cuba became the lone nation to accept the ship. Employing strict guidelines from the World Health Organization, the Cuban authorities assisted more than 1,000 passengers and crew members to exit the boat and board a caravan of buses with a special police escort to José Martí International Airport for chartered flights back to the United Kingdom. To contain the virus required “the efforts of the entire international community,” as Cuba’s foreign minister, Bruno Rodríguez, explained Cuba’s humanitarian response to Britain’s request for help. “Let’s reinforce health care, solidarity and international cooperation.” As the ship docked at the port of Mariel, some 25 miles west of Havana, Cuban citizens reinforced that message by transmitting, via Facebook, best wishes to passengers on board the Braemar. “I am sitting in my cabin responding to every Cuban who has suddenly sent me uplifting, welcoming messages of support. I am quite honestly in floods of tears at their kindness,” one cruiser, Anthea Guthrie, posted on her Facebook page. “They have made us not only feel tolerated, but actually welcome.”

Like every other nation across the world, Cuba is grappling with the spread of Covid-19. In mid-March, three Italian tourists were diagnosed with the virus and hospitalized; one subsequently died. Other recent travelers to the island have also tested positive and are currently undergoing treatment. Major gatherings at cultural and sports events have been canceled. Until yesterday, however, the government of President Miguel Díaz-Canel refrained from taking drastic action to curtail movement on and to the island. However, on March 20, with the number of confirmed infections at 21 and one death, the government announced that it was closing its borders to non-residents.

Cuba’s medical contributions to the escalating global battle against the pandemic have generated more attention than the containment, so far, of the disease on the island. A drug developed by the Cuban biotech industry, Interferon alfa 2b, which boosts the immune system and has proved effective in previous epidemics such as dengue fever and HIV/AIDS, was among the treatments chosen by Chinese medical authorities to stem the coronavirus outbreak; a number of other nations, including Chile and Spain, have sought access to the drug. Along with supplies of Interferon alfa 2b, a team of Cuban doctors has reportedly been dispatched to Italy to support medical efforts in that Covid-ravaged nation.

Cuba’s international efforts to stem the spread of the virus outside its borders are part of a long and consistent pattern of global humanitarian commitment. For decades, the government has provided full scholarships to thousands of foreign medical students to study at the vaunted Escuela Latinoamericana de Medicina, Cuba’s international medical university. Cuban medical brigades have brought free health care and services to impoverished populations in dozens of Third World nations; since 2004, for example, Cuban ophthalmologists have performed eye surgery—cataract, glaucoma, and retina re-attachment procedures, among other treatments—in some 39 nations as part of a humanitarian aid program known as “Operation Miracle.”

The “doctors’ diplomacy” programs have also been internationally recognized for their rapid response to disasters and epidemics. Cuban medical personnel were the “unsung heroes” in Haiti, according to National Public Radio, after the devastating January 2010 earthquake struck that country, killing at least 100,000 people; some 400 Cuban doctors were among the first responders to establish and staff hospitals for thousands of injured Haitians. Cuban medical personnel also established their credentials for courage during the dangerous fight to stem the Ebola epidemic in Africa. “One of the very first countries to step forward was Cuba, which sent more than 200 health professionals to the region—an awe-inspiring contribution for a country of just 11 million people,” stated then–US ambassador to the United Nations, Samantha Power, in October 2016—one of a number of compliments Obama administration officials paid to the achievements of the Cuban Revolution during the two years Washington was pursuing a policy of reconciliation, dialogue, and normalization of relations with Havana. “Noble efforts like these are precisely why the United States and Cuba must continue to find ways to engage, even as our differences persist,” Ambassador Power noted during her UN speech on the positive potential for US-Cuba collaboration in the international medical field and beyond.

But that engagement, so critical as the world confronts an existential threat to life as we know it, has been destroyed by the current administration’s policies of regime change. Trump has reversed the Obama effort at peaceful coexistence and replaced it with an aggressive set of sanctions, restrictions, and punitive operations that have escalated as the 2020 electoral season evolves. Cuba has accused the United States of targeting its international medical programs by pressing nations to expel Cuban medical brigades; two of them, Bolivia and Brazil, already have. The administration has limited travel to and from the island, and effectively threatened shipping companies ferrying imports to Cuba, disrupting trade and aggravating shortages of foodstuffs and petroleum.

“This pandemic knows no borders nor is it held hostage to history or politics,” states a sanctions relief petition currently circulating among Washington advocacy groups. Drafted by the Center for Democracy in the Americas, the statement calls for lifting all restrictions on remittances, humanitarian donations, and penalties against shipping companies, and for a return to dialogue between Washington and Havana. “The global community must do everything within its power to stop the spread of the virus, protect the people in its path, and ease the suffering it leaves in its wake. For the U.S. government, this means removing the sanctions that hurt the Cuban people the most.”

For Cubans, the irony is not lost that they are being punished at a time when they have a valuable contribution to make to the well-being of so many beyond their borders. “The great paradox is that while the ships contracted by Cuba to carry oil and food are harassed by the United States, the ships carrying the sick that nobody wants in their ports receive solidarity and respect in Cuba,” Cuban journalist Rosa Miriam Elizalde wrote recently in the Mexican newspaper La Jornada.

Indeed, for the passengers who were aboard the MS Braemar, Cuba’s solidarity and respect at a time of dire fear and uncertainty has made a demonstrable difference in their lives. “Thank you, Cuba that you could open your hearts to us. We will never ever forget that you reached out to us when absolutely nobody, and I mean nobody, else would,” Anthea Guthrie wrote on Facebook. “I trust we will never ever forget the help we’ve had from a poor country with a brave, huge heart.”