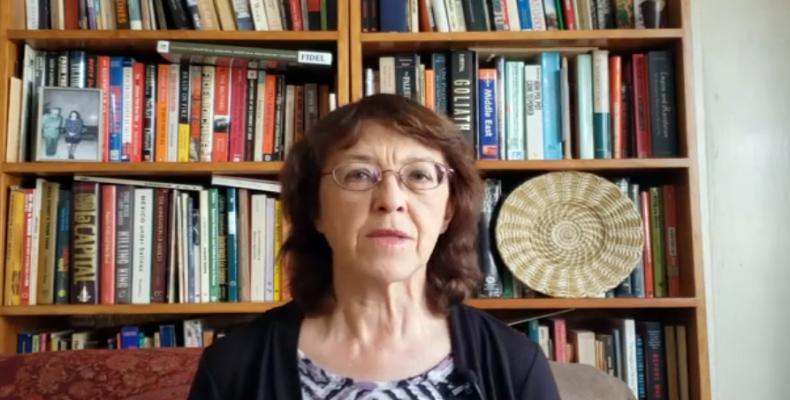 On the occasion of the 94th birthday of the leader of the Cuban Revolution, Fidel Castro, U.S. presidential candidate by the Party of Socialism and Liberation, and Cuba solidarity activist, Gloria La Riva, sent through RHC a congratulatory message. Full text and audio follow.

Happy birthday Fidel! Congratulations 94 years since you were born.
Long Live August 13th, Fidel's Day, and congratulations to the Cuban people, sons and daughters of Fidel.

Thank you for being that eternal rebel youth. You were absolved by History, each day of the Cuban Revolution, and in each Cuban defending your homeland.
I don't exaggerate when I say that I think of Fidel every day. I ask myself on any theme or struggle what would Fidel say? And what did he say how to apply also his teaching.

He's always present in my life. I think an example most important in Fidel's leadership of many during his whole life not only for Cuba but for the whole world, was during the special period.

In 1989 Fidel, anticipating the disappearance of the Soviet Union, affirmed that each Cuban would defend the Cuban Revolution and socialism no matter the cost, and that's how it was.

I was in Cuba many times during those years. I saw the great heroism of the people, despite all the difficulties, and I kept hearing that slogan Resist! Resist! Resist! And Succeed! That so many people repeated, including the children. Those were unforgettable words of Fidel.
For everything, they launched against Cuba in those years of the special period, and since the imperialists failed completely and they continue to fail.
I have a very special memory of Fidel, among others, It was May Day the year 2000 Fidel expressed his concept of Revolution. I had the great honor of being one of the invited to speak on May Day, and I gave him a letter the day before.
I said Comandante en Jefe, this letter is from a political prisoner in United States Mumia Abu-Jamal he's a revolutionary and African-American, and the government wants to execute him.
Fidel said no, they're not going to execute him because Cuba will support him. He acted immediately and proposed a Round Table about Mumia, he instructed for the documentary of his life to be translated, and the following month the whole Cuban people learned of the struggle of Mumia Abu-Jamal on Cuban national television. In addition to the Round Table thanks to Fidel.

These days, Mumia is possibly going to gain a new trial and possible freedom after so many years of struggle.

In the United States, we're facing a terrible catastrophe,  not just due to COVID-19  because there is no national plan to confront the crisis,  where people are facing enormous economic difficulty, where the youth are in rebellion against police brutality. In these circumstances, I remember Fidel in his allocution of History will Absolve Me when he spoke of people in the prisons, of people barefoot, without food,  without land, without housing, without jobs, it's as if he's speaking today to the U.S. people.

The light of Cuba shines brighter throughout the world. As comrade president Miguel Diaz-Canel says, it is only because of socialism, together with a valiant struggle of the people, that has allowed Cuba to extend its international solidarity with the doctors, to resist the blockade, and to confront in great measure COVID-19.

The revolutionaries throughout the world, we raise our banners in honor of Fidel.