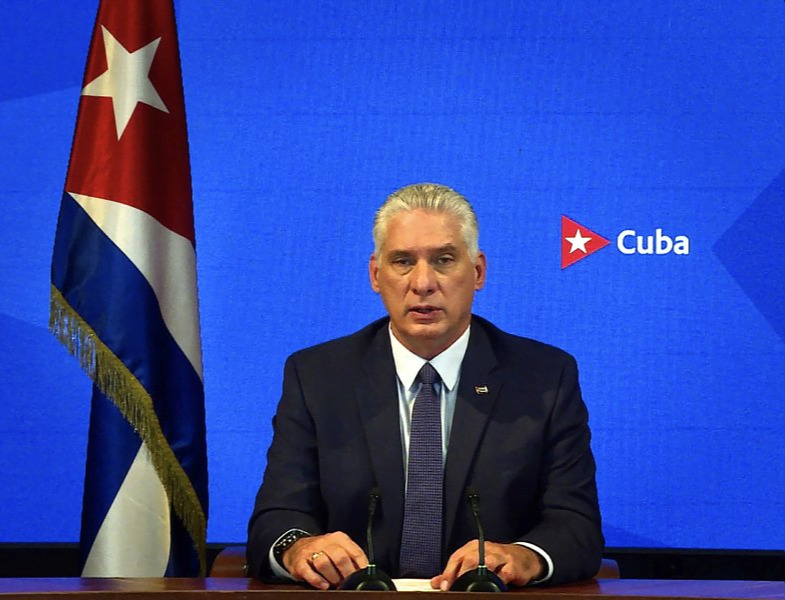 Here is the English-language translation of the speech delivered by Cuban President Miguel Diaz-Canel at the Second Meeting of the Sustainable Developent Goals, held virtually, during the General Debate of the 76th Period of Sessions of the UN General Assembly, Monday, September 20, 2021.

Six years ago, convened by the United Nations, practically all the leaders of the world made a commitment to leave no one behind, in the common purpose of meeting the Sustainable Development Goals by the year 2030.

If the truth be told, millions of human beings are still being left behind and for a majority of nations, the goals do not seem achievable in less than a decade.  An unjust and democratic international order is the cause of the inequality and exclusion faced today by the great majorities in a scenario aggravated by the devastating effects of the COVID-19 pandemic.  As long as this world order prevails, the noblest goals will be unreachable.

I say this with full knowledge of the facts from Cuba, which assumed the 17 commitments seriously and responsibly, but also aware of the great challenge posed by our condition as a small island developing state and the impact of the economic, commercial and financial blockade imposed by the United States.

As we have denounced so many times before the UN General Assembly, that blockade policy, deliberately and opportunistically tightened in the context of the pandemic, constitutes the main obstacle to the country's efforts to advance in its economic and social development and in the implementation of the 2030 agenda.

The difficulties are enormous, but so is our will to build a sovereign, independent, socialist, democratic, prosperous and sustainable nation.  That is why we reiterate here our commitment to the 2030 agenda as can be confirmed in the appreciable coherence between the objectives and goals of the national economic and social development plan until 2030 and the sustainable development goals.  On June 13, Cuba presented its voluntary national report on the implementation of the 2030 Agenda to the United Nations Political Forum on Sustainable Development.

As can be seen in that document, our priorities are focused on promoting the integrated and full development of human beings, achieving economic development with equity and higher standards of living and quality of life for the population.  We will continue to advance towards 2030 on the path of sustainable development by strengthening planning and coordination at different levels of government, promoting innovation, scientific research and the construction of alliances among the various actors of society as essential tools for recovery and progress.

Cuba will also continue to share its experiences with other nations through south-south cooperation, and work toward a renewed and strengthened multilateralism, for cooperation in solidarity and the search for global solutions to common problems.  We revolutionaries are incorrigible optimists and in the worst scenarios, we seek and find solutions because we believe in human beings and we believe in the future.

Building the world we dream of is an enormous task, but it is possible if we renounce selfishness and work together to transform the unjust international order into a more just, democratic and equitable one in which no one is left behind.