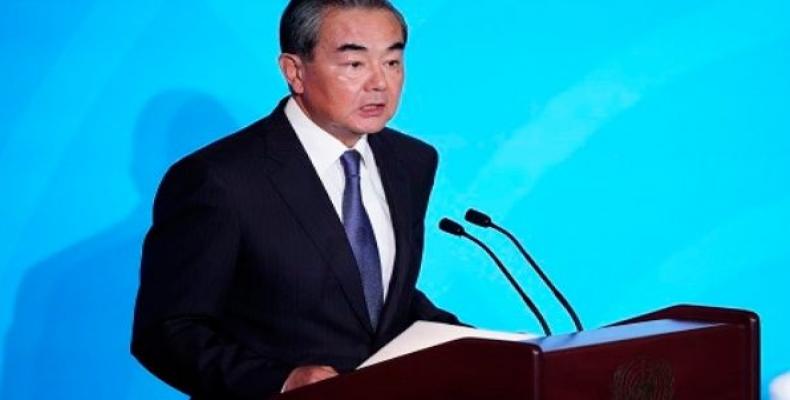 United Nations, September 27 (RHC)-- Chinese State Councilor and Foreign Affairs Minister Wang Yi said at the Strategic Development Goals summit at the United Nations that his country has been consistently working in order to reduce poverty and to reach its U.N. 2030 sustainable development objectives.

Wang listed all the progress made in various areas and explained that China has meaningfully diminished poverty and improved its people’s health conditions, along with pushing for green development.

"China is on track to eradicate absolute poverty next year and meet the first Sustainable Development Goals (SDG)," Wang stated. "10 years ahead of schedule."  China has enhanced the living conditions of its people by extending medical insurance to the whole population and by decreasing, for instance, neonatal and maternal mortality to six per 1,000 and two per 10,0000 births respectively.

However, "even with these achievements, we're keenly aware that China is still a developing country that faces a big challenge of uneven and inadequate development and it lags far behind developed countries," Wang said, adding that "we must take to heart the concerns of developing countries and ensure coordinated economic, ecological, and social development."

The 70th anniversary of the establishment of the People’s Republic of China offers a new starting point the minister said.  "We are committed to complete the building of a moderately-prosperous society in all respects next year, and make China a great and modern socialist country that is prosperous, strong, democratic, culturally-advanced, harmonious, and beautiful by the centenary of the People's Republic.”

The official concluded that "the 2030 Agenda represents a dream for a better future for the world. It has a lot in common with the Chinese dream of national rejuvenation. China will work tirelessly with the rest of the international community to realize the SDGs for 2030 and bring a better future to all."