From Beijing to Havana, a love story with Cuban cigars 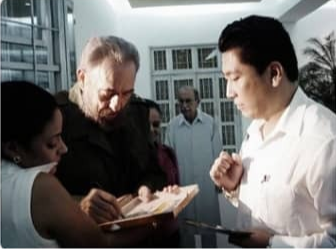 Havana, September 10 (RHC)-- It all began with a cigar box, a gift he received from his mother when he was a child. It was an empty box since the adults and friends of the family had already enjoyed the Habanos that filled the case, which came from a remote island in the Caribbean.

Such is the story of Chinese businessman Wang Zheng, one of the participants at the recent celebrations of the 50th anniversary of the launching of the Cohiba, the most emblematic and prestigious brand of the Habanos Corporation, S.A.

In an interview with RHC, the 50-year-old businessman reminisced about when his mother, when he was three years old, traveled to Cuba and brought a gift, a cigar box.

"The brand was called El Rey del Mundo. She shared the cigars with her family and friends and handed me the box. The box was beautiful. So that time is my first memory of cigars."

It was then -- he explained-- that he became interested in the history of tobacco and cigars. By the turn of events, when he grew up, he studied Spanish in China and had the opportunity of perfecting it on the island.

It was here in Cuba that he began to learn about the island's history and tobacco.

"I fell in love with Cuban tobacco, started smoking and began to study and deepen my knowledge of the industry. Then I began entertaining some ideas on having a deeper involvement in the tobacco world," explains the Chinese cigar aficionado who ended up involved in efforts to expand the presence of the Cuban cigar in his country's market.

In 1998 he founded Lu Yuankun S.A. and began marketing the Cuban brands and has remained to do so to date.

"Today, I could say that I am the only person in China who knows so deeply about Cuban tobacco. Thanks to my family, thanks to Habanos, thanks to Cuba," Zheng says with pride.

China has outstanding cigar factories for its market and its line of premium cigars, and it is the world's largest producer of cigarettes. The fame of the hand-rolled Cuban cigars is well known in the giant Asian country.

"Actually, for all Chinese, there are two things they always know about Cuba: Comandante Fidel Castro and Cuban tobacco. So when I started working with tobacco from Cuba, I didn't have to do much of a presentation, and people knew that the best tobacco in the world is Cuban."

However, several decades ago, there were hardly any stores that sold Cuban cigars in China.

So Wang Zheng founded the first Cigar Group in Beijing, and Cuban cigars began to be sold. Zhang took to the task of granting many interviews in the press and on Chinese television so that he could inform more about the product's history and quality.

Nowadays, China is one of the leading markets for Premium Cuban cigars sold by Habanos S.A.

In 2019, for the first time in Habanos S.A.'s history, it became its No. 1 market worldwide; it rose from the No. 2 position and overtook Spain.

Sales to China have been remarkably robust over the past six years, growing by more than 50 percent. It is in second place since Spain returned to the first spot in 2022 and 2021.

In Zheng's view, the Chinese market is enormous, and there is still work to be done to expand the sale of Cuban cigars even further.

To achieve that, he considers that not just a commercial relationship, not just a buying-selling relationship, is needed, but the market also requires knowledge and improvement for its products. So I think both countries must make deeper collaborations to develop together.

By the end of the interview, Zhang stresses that Cuba and China have a special bond, which he describes as one observed among family and friends.

And every Chinese cigar smoker, he concluded,  wants to try and get to know Cuban tobacco. We also have very good economic growth, which is why every Chinese has money and resources and can enjoy and smoke a Cohíba.